Listings for Holiday Games and Apps Appear on Apple TV, Undoubtedly in Error

As noted by Mac OS Ken, a new "Holiday" content section has appeared buried in the iTunes Store on the Apple TV. Interestingly, the section contains numerous banners advertising apps and games, which are of course not currently compatible with the Apple TV. 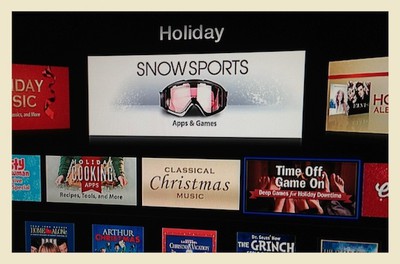 The new content sections are not functional, as no listings appear when the various banners are selected with the Apple TV remote. The section can be found by navigating to Movies -> Genres -> Classics -> Holiday Music, Movies, and More.

The new listings are almost certainly an error, with banners for Apple's new Holiday section [iTunes Store] being served to the wrong device.

Steve Jobs had noted soon after the introduction of the second-generation Apple TV in September 2010 that an App Store for the iOS-based device could launch when the time is right. Such an effort would, however, require Apple to work with developers on tools for creating apps for the device, and there has been no sign of an effort on that front.

It's not often Macrumors builds up my hopes, and dashes them in the very same story!


I made sure to not let you get past the title without having them dashed. :)
Score: 12 Votes (Like | Disagree)

Very unlikely. People want to play more than Angry Birds on a console.

Dorfdad
About time they get serious the gaming business is a billion dollar field.

THink for a second.

Free Apple Controller APP for iphone, itouch and ipad that works as a remote with the Apple TV. Apple TV can work like a Wii-U as well. Two players One on TV and one on the iPhone or iPad screen airplay synching.

Optional Bluetooth controller that is identical in layout and buttons to free app. So you can choice.

$149.99 for the Apple TV / Game console...
Activate with iCloud and allows you to stream / play your music while you game as well.

This would without a doubt make a major dent in the Game market...
Score: 6 Votes (Like | Disagree)
Read All Comments