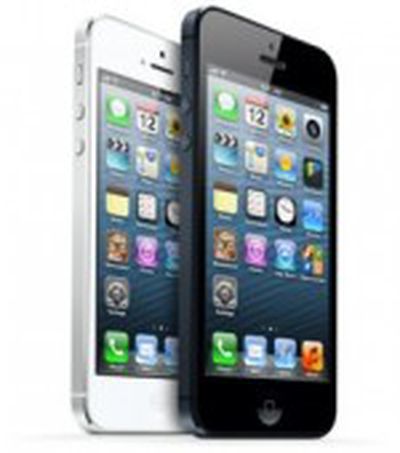 9to5Mac reports that Apple is set to begin sales of unlocked iPhone 5 units to U.S. customers as soon as later today. Sales are said to begin in the company's online store, with retail stores currently receiving units ahead of an unspecified in-store launch date.

Apple will begin selling an unlocked version of its iPhone 5 through its online store as soon as 9 PM tonight, according to our retail sources. The unlocked iPhone 5 price range will likely be $649, $749, and $849 depending on a choice of either 16GB, 32GB, or 64GB of storage.

While unlocked devices are the norm in many of Apple's markets, Apple typically restricts sales in the U.S. during an initial time period after launch to devices locked to specific carriers. For the iPhone 4S, it took less than one month for Apple to begin selling unlocked models to U.S. customers, but it has already been over two months since Apple began U.S. sales of the iPhone 5.

Apple is also said to be expanding its Personal Pickup program for the iPhone 5, allowing users to reserve a device at any time for pickup the following day rather than having to wait until 10:00 PM when the stores have closed for the day to place their reservations.

adildacoolset
I don't care just give me itunes 11!

oh wait, people can't complain about that anymore. I wonder what people will whine about next
Score: 4 Votes (Like | Disagree)

onthecouchagain
Apple to Begin Ripping You Off as Soon As Later Today.
Score: 4 Votes (Like | Disagree)

probly not a math major

I've always wondered this, but why are unlocked or off contract smartphones more expensive than iPad/tablets?

Apple's iPhone twice as profitable per unit as iPad (http://appleinsider.com/articles/12/07/27/apples_iphone_twice_as_profitable_per_unit_than_ipad)

While you might be paying $199 upfront for a contract iPhone, the carrier is paying the rest ($650 – $199 = $451) to Apple. In other words, you're indirectly paying Apple the remaining ~$451 over the course of the duration of your contract.

With an unlocked iPhone, Apple is looking to make the same amount of profit, thus charging the entire $650.

It's not exactly rocket science.

Contracts, at end of the day, especially in the USA, are absurdly expensive. Why the hell would I want to blow $100+ per month on a cell phone connection? Americans don't know any better. Mobile networks are MUCH cheaper outside of the USA.
Score: 3 Votes (Like | Disagree)

I don't think some people realize how expensive it is to design, build, distribute and support such advanced devices. There's tons of costs that need to be covered that you don't *see*.


And executive bonuses to consider!
Score: 3 Votes (Like | Disagree)

ChrisTX
I've always wondered this, but why are unlocked or off contract smartphones more expensive than iPad/tablets?
Score: 3 Votes (Like | Disagree)
Read All Comments