Apple has released Apple TV Software Update 5.1 for 2nd and 3rd generation Apple TV models. The release has build number 10A406e. The biggest changes include support for Shared Photo Streams, the ability to send audio content from the Apple TV to AirPlay-enabled speakers and devices (including AirPort Express and other Apple TVs), and the ability to switch between multiple iTunes accounts. 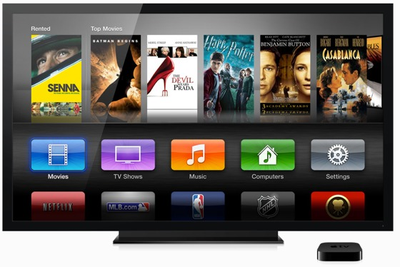 AirPlay - Send audio content from Apple TV to AirPlay-enabled speakers and devices (including AirPort Express and other Apple TVs). Also includes the ability to require an onscreen code to use AirPlay with your Apple TV.

Main menu - Reorder icons on the second page by holding down the select button on the remote.

Subtitles - SDH support for the deaf and hard-of-hearing as well as improvements to viewing and selecting subtitles.

The Apple TV can be updated directly on the unit by going to the Settings menu, then General, then selecting Update Software.

The last Apple TV update was released back in June.


Sarcastic? It's how I watch practically all video now.
Score: 69 Votes (Like | Disagree)

Sarcastic? It's how I watch practically all video now.


I as well. I cut the cable years ago and now use apple tv exclusively. Very useful in my house.
Score: 22 Votes (Like | Disagree)

hppy29
I love my Apple TV. Just wish they would add features for outside the USA
Score: 22 Votes (Like | Disagree)

Riots at the factory, release a software update.


Software engineers are supposed to break up a riot half way around the world?
Score: 14 Votes (Like | Disagree)

chrmjenkins
Come on apple, still needs HBOGO and a handful of other streaming services.
Score: 14 Votes (Like | Disagree)
Read All Comments

Monday July 4, 2022 5:50 am PDT by Hartley Charlton
Apple is working on an Apple Watch Series 8 model with a larger display, according to DSCC's Ross Young and Haitong International Securities's Jeff Pu. In October last year, Young suggested that the Apple Watch Series 8 could come in three display sizes. Now, responding to a query about the rumor on Twitter, Young claims that the additional display size joining the Apple Watch lineup will be ...
Read Full Article • 138 comments