One of the iPhone 5 features highlighted by Phil Schiller during yesterday's introduction was wideband audio, which offers "crisper word clarity and more natural sounding speech" according to Apple's press release. Schiller noted that the feature requires carrier support and that it would be supported by over 20 carriers on the iPhone 5 at launch, but did not specify which carriers those would be. 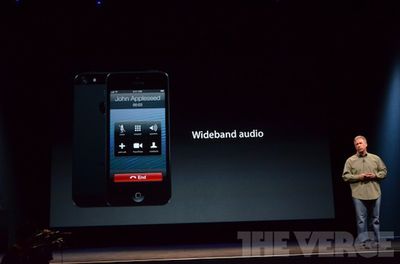 Phone Scoop reported late yesterday that Sprint has confirmed it will not support wideband audio (frequently marketed as "HD Voice") on the iPhone 5, and PCMag.com has a good overview of why none of the three major U.S. carriers are likely to support it.

There are three ways to do high-quality, or "wideband" voice calls.

One is to use a new codec, called AMR-WB, over a "3G GSM" (UMTS) network. That's what some European carriers are doing and what's in the iPhone. This is relatively easy to implement on the phone side, provided that the network supports it. In the U.S., only AT&T and T-Mobile would be eligible to do this, and they won't because they're focused on 4G (see below.)

The report goes on to discuss the other two mechanisms for providing HD Voice support, which include a CDMA-related codec being used by Sprint and voice-over-LTE technology being pursued by both AT&T and Verizon, but the iPhone 5 does not support either of those mechanisms.

The result is going to be extremely limited HD Voice experiences in the U.S. for at least a few years. It'll be restricted to calls between limited sets of phones, probably on the same carrier, and it won't be on the iPhone 5.

Beyond wideband audio, Schiller touted several other audio enhancements on the iPhone 5, including a total of three microphones for noise cancelation and accurate voice transcription, a smaller and improved speaker, and a noise-canceling earpiece.

(Images from The Verge)

floatingspirit
US Carriers suck. Always have.
Score: 30 Votes (Like | Disagree)

So i am paying money for a "wideband audio" feature that at verizon i cannot access or use?


Yes. Without wideband audio the iPhone would certainly be cheaper. :rolleyes:
Score: 17 Votes (Like | Disagree)

chrmjenkins
But remember, apple only caters to the American market. ;)
Score: 13 Votes (Like | Disagree)

FSMBP
Do yourself a big favor and use Skype and you'll see how crappy AT&T/Verizon/Any Cell provider's quality is.

Get a friend with an iPhone. Both download Skype (you'll need usernames, yuck, but whatever). Call your friend on Skype. Talk for at least 5 minutes. Hang up, then call using your carrier (AT&T/Verizon) and you'll see how these horrible the carrier's quality is.

I know AT&T is concerned on making money, but at least make some improvements to the voice network.
Score: 9 Votes (Like | Disagree)

You are very misinformed.

European "operators" are actually much in the lead. We still have unlimited data with LTE. A few European countries don't have LTE just yet (although the UK is now rolling it out due to a regulatory hurdle). Countries like Germany, Austria etc have full fledged LTE networks.
Score: 7 Votes (Like | Disagree)
Read All Comments