With Apple expected to introduce its "iPad mini" next month, observers are closely watching what other companies are doing in the smaller tablet space, and a media event today Amazon has shown its hand with a new line of Kindle products headlined by a new 8.9-inch Kindle Fire HD tablet with 1920x1200 display.

As noted by The Verge, the Android-based Kindle Fire HD includes stereo speakers with Dolby Digital Plus support, dual Wi-Fi antennas for better performance The Kindle Fire software has also been enhanced with new Whispersync technology for saving and syncing game and audiobook progress, as well as new parental controls, third-party apps such as Facebook and Skype, and an IMDB partnership for displaying cast and production info on movies as they're being shown.

The standard 8.9-inch Kindle Fire HD is priced at $299 with 16 GB, but Amazon is also offering a $499 Kindle Fire HD with 4G LTE model that bumps storage to 32 GB. The LTE model comes with a data package costing $49.99 per year that offers 250 MB per month of data, 20 GB of cloud storage, and a $10 Amazon Appstore credit. Both models ship on November 20. Amazon is also introducing a 7-inch 16 GB Kindle Fire HD for $199 that begins shipping on September 14, but details on differences from the 8.9-inch model such as screen resolution are not yet clear. 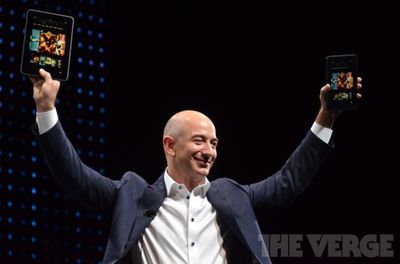 Amazon CEO Jeff Bezos introducing new Kindle Fire lineup
Amazon has also introduced an updated original Kindle Fire. The Verge notes that the 7-inch Android tablet has been updated with a new processor, more RAM, and increased battery life. The updates also come with a significant price drop to $159, down from the current $199. The new Kindle Fire begins shipping on September 14.

Finally, Amazon offered updates to its more traditional Kindle lineup, dropping the entry-level Kindle price to just $69 while introducing its new Kindle Paperwhite, as detailed by TechCrunch. The Kindle Paperwhite, which will be available October 1 at $119 for the standard model and $179 for the 3G model with free cellular access, includes frontlighting while still boasting an 8-week battery life.

mariocapo
Gotta give Amazon a lot of credit. They took a lot of great pages out of the Apple playbook when it comes to ecosystem, hardware/software integration and product presentations. The Fire HD with 4G, 32GB internal storage, 200GB cloud storage and $50/year data plan is pretty mind-blowing for $499. Wow! I should add, while still putting their own innovative twists on their products in both hardware and software. Nice to see some companies can compete without cloning.
Score: 54 Votes (Like | Disagree)

iPusch
Since I got an aluminum iPad, I am kinda disinterested in those plastic things ;(
Score: 47 Votes (Like | Disagree)

nuckinfutz
I'm not wasting my money on any Amazon crap
Score: 42 Votes (Like | Disagree)

Rizzm
Apple seems to be seriously falling behind in hardware offerings on mobile products. They need to pick things up and/or drop prices for sure.
Score: 34 Votes (Like | Disagree)

I'd love to get my hands on one and compare it to the iPad.


It's going to sell very very well. And dare I say - as great as the iPad mini might be - unless it's also 299 - Apple will have missed the boat.
Score: 32 Votes (Like | Disagree)
Read All Comments