With rumors and leaks offering a good bit of detail on what has been claimed to be Apple's 7.85-inch "iPad mini" setting up for an October debut, we worked with CiccareseDesign to create a new set of renderings and even a 3D model of the device that readers can explore on their own. 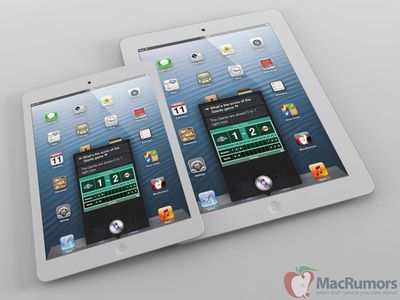 In coming up with this particular design, we've drawn from the numerous rumors, part leaks, and work by case manufacturers who are trying to determine what the device will look like in order to have their products ready for sale as soon as possible. What we've come up with is a thin design measuring at roughly the same thickness as the iPod touch and carrying thinner side bezels than seen on the top and bottom of the device.

One notable difference between our design and those put forth by others is the location of the headphone jack. Case manufacturers have uniformly been showing the headphone jack along the top edge of the iPad mini, as is seen on the full-size iPad, and various renderings have generally followed that standard.

But over the past several weeks, we've seen several leaked photos of what is claimed to be the new dock connector flex cable part for the iPad mini, which shows a headphone jack located next to the dock connector. This would put the jack on the bottom edge of the device as is seen on the current iPod touch and as will apparently be the case with the next-generation iPhone reportedly launching later this month.

Our interactive 3D model of the iPad mini, which requires WebGL, allows users to explore the device's design from all angles to get a good feel for its dimensions. On OS X, Safari users can turn on WebGL by first navigating to Safari -> Preferences -> Advanced -> Show Develop menu in menu bar and then choosing the "Enable WebGL" option from the Develop menu that appears.

This video combines the renderings in a slideshow showing the device alongside the current iPad and rumored next-generation iPhone.


As has been previously noted, the 7.85-inch iPad offers 66% of the surface area of the current 9.7-inch iPad and almost 40% more surface area than competing 7-inch tablets. This size comparison shows it head-on next to a current iPad.

Unfortunately, as we were putting together these renderings, additional leaks and mockups have appeared that call into question several elements of our rendered design.

Apple.pro has posted photos of a dummy design of the rumored iPad mini -- presumably designed from case manufacturer specifications.

This shows an iPad mini with a steeper taper on the edges. Our design assumed Apple would preserve similar lines to the current iPad, while this is more in line with the iPod touch design.

In a separate example, another design prototype shows off similarly less-tapered edges:

Another potential caveat to our renderings is that while Apple will be bringing Siri to the iPad in iOS 6, it will only be arriving to the third-generation iPad. The iPad mini is believed to be based on the iPad 2 internals, presumably allowing for a much lower price, and if there is a technical reason that the iPad 2 won't support Siri, then the iPad mini may not as well.

Finally, we're now seeing some possible part-evidence that the location of the iPad mini's headphone jack may not be on the bottom of the device. RepairLabs believes the previous part leaks may not have been accurate, though leaves the conclusion open:

One major difference between our photos and the others are that ours show the traditional setup: the headphone jack with a bit of distance before the charger port. The images from iResq and Nowhereelese.fr suggest that the jack and port will be closer together, making the iPad Mini more like a smartphone in design. Who’s right? That remains to be decided.

Apple is believed to be working on launching the iPad mini in October of this year.

autrefois
I call fake. True iPad mini mockups usually have a ruler on the side. 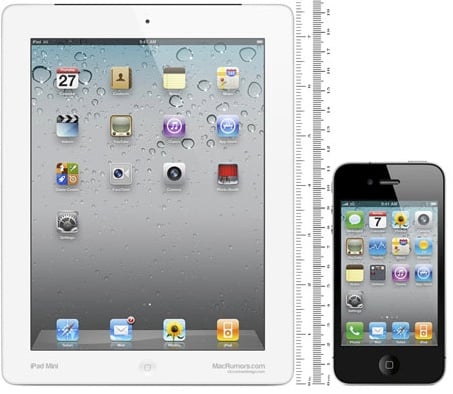 I am fully expecting the iPad mini to come with a ruler when it's launched.
Score: 19 Votes (Like | Disagree)

devilbond
MacRumors, you're like that guy whispering the ending of the movie to his friends in the cinema.
Score: 18 Votes (Like | Disagree)

D.T.
I think the iPad Mini is actually the new iPhone. Bigger screen you say? Enjoy.
Score: 11 Votes (Like | Disagree)

needfx
I am so getting a mini!
Score: 8 Votes (Like | Disagree)
Read All Comments