Following on the heels of our report from Wednesday about Apple's preparations for developer seeds of OS X 10.8.1, Apple has now released the first build of the Mountain Lion update to developers, according to 9to5Mac.

The release has a build number of 12B13 and Apple reports no known issues, but asks developers to focus on a wide variety of areas for their testing. The delta update -- where only items that have changed are downloaded -- weighs in at 36.4MB.

According to 9to5Mac, developers have been asked to test Active Directory, Microsoft Exchange in Mail, PAC proxies in Safari, SMB, USB, and Wi-Fi and audio when connected to the Apple Thunderbolt display.

The OS X 10.8.1 seed is available for download via the OS X Developer portal at developer.apple.com.

Goldfrapp
Hope this release fixes the bug where folder item count wouldn't update no matter what. 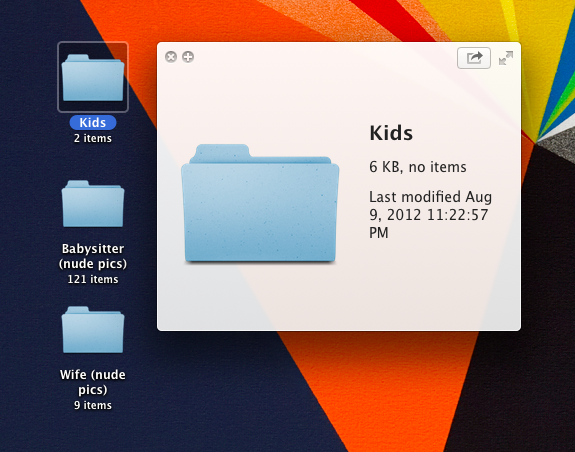 thelink
Steve Jobs would never had allowed this. ;)
Score: 9 Votes (Like | Disagree)

It's actually a fairly big update. Code files are typically only a couple of kilobytes in size. So a 36.4MB update is fairly big. And anyways, Apple probably wants to just focus on the most critical updates first and then move on to the graphical bugs. Plus, this is only the first build.
Score: 6 Votes (Like | Disagree)

In other words, the biggest train wreck in OS X's history continues to be a train wreck with 10.8.1...other than the battery, nothing else is fixed or what?


Considering you've never bought ML and used it on your own mac. I don't think you're in a position to call it "The biggest train wreck in OS X's history". I've been using it since DP1 on my own Macs and it has held up fairly well.

There were far worse bugs in 10.6 when that came out but at the time you were saying "Microsoft is dead".

On the whole, the bugs in ML are relatively minor for a .0 release, and some of them are being fixed in this .1 release. This .1 developer release is the first seed. So again there may be more in the way of bug fixes to come in the next seed.

Saturday January 23, 2021 6:00 am PST by MacRumors Staff
We continued to hear a lot more about Apple's plans for its Mac lineup this week, including word of a high-end redesigned MacBook Air and the return of an SD card slot as part of the upcoming MacBook Pro redesign. It also sounds like Apple has been working on Face ID for Mac, but it won't be appearing in a redesigned iMac this year as originally planned. This week also saw rumors about the...
Read Full Article • 58 comments