With the opening ceremonies for the 2012 Summer Olympics set for tomorrow in London, Apple is preparing to offer an extra bonus to some customers visiting its stores in the area during the roughly two-week event. The company has produced a series of four lapel pins commemorating the London Olympics, displaying the flag of the United Kingdom in place of the screen of both black and white iPhones and iPads. 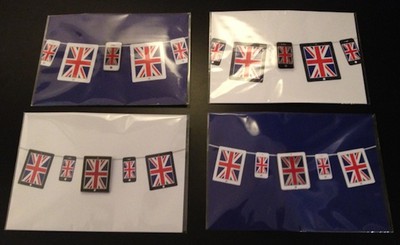 The pins are distributed attached to larger sheets of cardboard that appear as five iOS device flags hanging on a line, with the center one being the actual lapel pin.

We have not confirmed the exact details on distribution of the pins, but we've heard that select stores will be distributing the free of charge while supplies last on select days. Also unclear is how broad the distribution will be: Apple has a total of six retail stores inside the M25 motorway encircling London, with several others just outside and a total of 33 in the United Kingdom.

Apple offered a similar promotion during the 2010 Winter Olympics in Vancouver, distributing an iPod nano pin with the Canadian maple leaf at one store and a pair of pins showing off the maple leaf and the Apple logo at the other Vancouver-area store open at the time. Apple now has four stores in the Vancouver area.

coolfilmaker
Wow. That's not tacky at all.
Score: 12 Votes (Like | Disagree)


As a British person I can safely say that I've not seen a Union Jack hung anywhere in my city for ages...and its a big city.

It's nowhere near as bad (not sure thats the correct way of putting it) as in the US, where its seemingly common to have a flag hanging on the front of your house.
Score: 6 Votes (Like | Disagree)


I think you win the award for most pathetic comment of the year.
Score: 5 Votes (Like | Disagree)

Why not British Flag on underwear? :cool: It would sell like hot bread rolls! Sigh...

Pampers are selling Special Edition nappies with the Union flag on them, "to support Team GB in the Olympics".

I'm not sure how what my daughter does in her nappies constitutes support for the team, but then I'm not in marketing.
Score: 5 Votes (Like | Disagree)


As an Irish person, I have no problem with it. As someone else said, they don't have Union Jack's everywhere all the time. It's just on special days. We do the same on Saint Patrick's Day and other special occasions.
Score: 4 Votes (Like | Disagree)

Nowt wrong with a bit of national pride.

I don't think some realise it's different to how it was 30 years ago. We break out the Union Flag now for the right reasons, basically to celebrate or to party.

But you know, if people want to see it as it was that's their issue to work through, not ours.
Score: 4 Votes (Like | Disagree)
Read All Comments