Prices of Thunderbolt Cables Likely to Drop in 2013

One of the main criticisms of the new Thunderbolt connectivity standard embraced by Apple has been its cost, which adds a considerable premium to the prices of compatible peripherals. Even Thunderbolt cables are expensive, with Apple's 2-meter cable priced at $49, a price on par with offerings from the few other companies selling Thunderbolt cables so far.

In a report published earlier this week, Ars Technica took a look at why the cables are so expensive and investigated some of the upcoming advances that could help bring prices down beginning late this year or early next year. 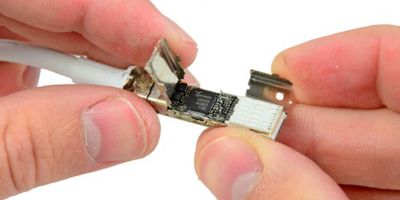 Inside an Apple Thunderbolt Cable connector (Source: iFixit)
As revealed in iFixit's teardown last year, Apple's Thunderbolt cable is expensive because it contains a significant number of chips and other circuitry, starting with the transceiver as noted by Ars Technica:

In addition to the transceiver, the current reference design also requires a separate microcontroller, as well as power management and voltage regulation chips to deliver the 3V data signals and 15V optional power supply for bus-powered devices. Essentially, there are four integrated circuits (IC) at either end of a Thunderbolt cable.

But Intersil appears set to simplify the design for Thunderbolt circuitry later this year with its own products that will reduce the number of chips and allow for cheaper cable to be used.

What Intersil calls an "Active Cable IC Solution for Thunderbolt Technology" appears to be the only complete turnkey solution we could find among manufacturers selling ICs for Thunderbolt. It combines the microcontroller and transceiver into a single signal processing chip, and combines power management and voltage regulators into a single power management chip. This cuts the number of required ICs from four to two.

With the new chips being manufactured using a 40-nanometer process, yield and cost efficiency are improved and heat generation is decreased, leading to further cost savings on the cable design. Combined with other improvements, Intersil's solution will bring substantial improvements in component costs, size, and power usage, which together should yield significant cost savings for consumers.

samcolson4
Now all we need is some less expensive stuff to plug it in to...
Score: 55 Votes (Like | Disagree)

chirpie
"Prices of Thunderbolt Cables Likely to Drop in 2013"

I don't mean to be a bit negative but...

"Prices of Anything Related to Technology Likely to Drop in 2013"

would most likely also work.
Score: 22 Votes (Like | Disagree)

Hands up how many of you own a Thunderbolt peripheral >2 years since launch?

PC manufacters have been very slow to adopt, however perhaps it will gain traction. Although it's superior I can see it taking FireWires place as 2nd to USB3.

Actually, given how strong Thunderbolt seems to be, I think it could easily be an industry standard if they could drop the price.
Picture this: in the year 2015, the ONLY ports on most computers are USB 3.0 and Thunderbolt. You no longer have a need for VGA, DVI, HDMI, FireWire, or even Ethernet. All of those could be run through Thunderbolt and suddenly it's much easier to connect devices to computers. Yes, it would certainly take a long time to adopt the technology like that, but it sounds like a convenient world once fully adopted, doesn't it?
Score: 15 Votes (Like | Disagree)

When is Monster Cable going to release a Thunderbolt cable?

There are no optical T-Bolt cables at any speed. You are quoting roadmap and theoretical numbers. And "multi-path" is questionable - a T-Bolt chain is single-path.

T-Bolt 1.0 does not support optical cables - but there are certain vaporware noises about connectors with Cu-Optical transceivers in the cable for longer cable runs at copper speeds - but each end is a copper connection.

This is a liability, not an asset. Daisy chains are pure suck - since you often have to shut the system down to remove or insert a device in the middle


As usual, you're wrong about everything, and have the audacity to proclaim "fail" about the statements of others.

Sumitomo makes optical Thunderbolt cables. They've been available for a while now. Sumitomo also manufactures several of the other Thunderbolt cables that have recently come to market (Elgato, Belkin), but they don't sell direct in the US. Yes the optical transceiver is housed in the cable connector, right where it should be for a consumer device. It keeps the price of everything lower for those that don't need the range of optical, it keeps a potentially dangerous laser device out of harm's way, and doesn't require any expensive, easily damaged or contaminated lenses in the connector.

The speed of Thunderbolt is entirely determined by the controller. Thus far all controllers on the market are 10 Gbps, full-duplex, per channel. All cables are dual channel, and thus multi-path.

The copper implementation of Thunderbolt is actually twice the bandwidth of the optical versions that were demoed as Light Peak. Those only offered a single 10 Gbps channel, rather than the two that are standard with Thunderbolt. Short of silicon photonics, there is always an electrical/optical boundary, and your semantical arguments about the significance of where this boundary lies are pointless. For now, economics and practicality will determine where they are.

Also, the requirement of Thunderbolt devices to be hot-pluggable means that daisy chaining isn't much of a liability, unless you are silly enough to boot off of a device that isn't at or near the beginning of the chain. But then again, you're welcome to voice your opinion that daisy chains suck. At least that isn't patently false, like most of the other troll-bait claims you make.
Score: 12 Votes (Like | Disagree)
Read All Comments