Earlier today, Russian security firm Kaspersky Lab reported that it had been alerted to an app available in both Apple's App Store and the Google Play store for Android that was quietly harvesting users' address book contacts and sending them to the developer's servers. The developer's systems were then sending text messages to those contacts advertising the application, with the "From" field being spoofed with the original user's mobile phone number. 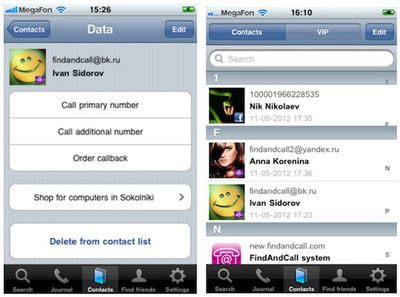 The application, Find and Call, ended up primarily targeting Russian users due to its use of the Russian language in the app description, but the app was available in App Stores around the world. The report notes that while there have been previous incidents of personal information being transmitted inappropriately from App Store apps, this appears to be the first time that such information has been used in a malicious manner.

Malware in the Google Play is nothing new but it’s the first case that we’ve seen malware in the Apple App Store. It is worth mentioning that there have not been any incidents of malware inside the iOS Apple App Store since its launch 5 years ago. But the main issue here is user’s privacy again. It’s not for the first time when we see incidents related to user’s personal data and its leakage. And it’s for the first time when we have confirmed case of malicious usage of such data.

In several updates to the original post, Kaspersky Lab notes that spam invites are also being sent via email. One user was also able to get in touch with the application's author, who claims that the behavior is a bug, although the explanation certainly appears to be suspect.

It now appears that Apple has removed Find and Call from the App Store, as links to the app in the U.S. and Russian App Stores show that it is unavailable. The app did exist for some time, however, as it debuted in the App Store on June 13.

Apple has been working to limit third-party apps' access to personal data, and will be rolling out enhanced permission requirements in iOS 6 to alert users when their data is being accessed.

Update: Apple has issued a statement to The Loop acknowledging that it has pulled the app.

“The Find & Call app has been removed from the App Store due to its unauthorized use of users’ Address Book data, a violation of App Store guidelines,” an Apple representative told The Loop.

Richdmoore
I hope apple uses it's "kill switch" to delete this app from those phones that have already downloaded the app.
Score: 35 Votes (Like | Disagree)

This would never have happened if Steve Jobs was still with us. :eek:

The only way i can make it through the day without suicide is convincing myself that people like you are just trolls.
Score: 21 Votes (Like | Disagree)

RoelJuun
The first question that pops up in my mind is; how got it in the app store in the first place.
Score: 21 Votes (Like | Disagree)

Why are people acting like there hasn't been malware on the iPhone before? About two months ago, I had malware that quietly changed whatever phone number was the top of my Favorites list to a 1-800 number I didn't recognize. Delete that entry from my Favorites list, and two seconds later, whatever the new top number was on my Favorites changed to that 1-800 number. I ended up wiping and reinstalling iOS, and the problem went away.

This started up after I got a spam SMS message.

Anybody else seen this?

I hope apple uses it's "kill switch" to delete this app from those phones that have already downloaded the app.

In this case, thats a good idea. If all the app does is spam, spam, and spam, then kill it. Was this a free app? If not, they should take the money from the developer's account (if he has received it already) and return it to the people who downloaded this app.
Score: 17 Votes (Like | Disagree)

chainprayer
Is it just me, or is anyone else wanting to see the kill switch in action? :-P
Score: 16 Votes (Like | Disagree)
Read All Comments

Sunday September 25, 2022 6:50 am PDT by Sami Fathi
Apple may decide to release its remaining products for 2022, which include updated iPad Pro, Mac mini, and 14-inch and 16-inch MacBook Pro models, through press releases on its website rather than a digital event, according to Bloomberg's Mark Gurman. In his latest Power On newsletter, Gurman said that Apple is currently "likely to release its remaining 2022 products via press releases,...
Read Full Article • 188 comments

Monday September 26, 2022 7:34 am PDT by Sami Fathi
Today marks exactly two weeks since Apple released iOS 16 to the public. Besides the personalized Lock Screen, major changes in Messages, and new features in Maps, the update has also seen its fair share of bugs, performance problems, battery drain, and more. After major iOS updates, it's normal for some users to report having issues with the new update, but such reports usually subside in...
Read Full Article • 221 comments