As is typical when previewing a new operating system, on Monday Apple's Scott Forstall showed off 10 main features of iOS 6 including improvements to Siri, Facebook Integration, a new Maps app, and a Do Not Disturb mode.

However, there is a lot more to the next iPhone operating system than that. A slide shown at the end of Monday's keynote displayed a number of new features that didn't warrant full keynote coverage but are still worth mention to iOS users: 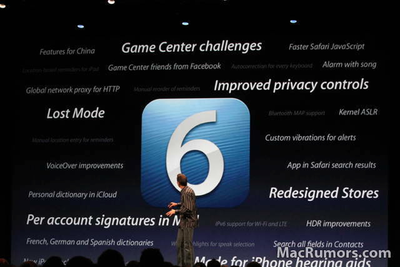 - Users can now set custom email alerts for any of their VIP contacts.

- Turning Bluetooth on and off is much quicker than it was in iOS 5. Bluetooth controls are now located in first page of System Preferences, next to the Wi-Fi and Airplane Mode controls.

- The iPad gains a native Clock app with similar function to the iPhone version.

- Users no longer need to enter their password to update apps -- only when purchasing an app for the first time. Additionally, users aren't kicked to the home screen when buying or updating an app in the App Store.

- Newly downloaded apps gain a temporary 'New' banner on the icon to make them easier to pick them out.

- Geofencing alerts have been added to Find My Friends. One possible use, suggested by Macworld: "If you’re one of the many workers who carpools, you can set up a geofence on the driver to let you know when they leave their house."

- In iOS 5, the color of the menu bar would change depending on what was happening in the background -- green for a phone call or blue for Personal Hotspot. In iOS 6 those colors still exist, but the menu bar changes color to better complement the app. MaxThemes.com has more on how Apple color-matches the menu bar.


- One of the most unnecessary additions to iOS 6 is also one of the most telling. Apple has made the metallic volume slider in the iPod app and elsewhere change its reflection as the iPhone is tilted -- as if it were actually reflecting light. While some may say it's a waste of engineering resources, this shows Apple's incredible attention to detail.
[ 209 comments ]

Mike Oxard
Staying in the App store after making a purchase, yaaaay!!!!
Score: 58 Votes (Like | Disagree)

urbanj
I would love the ability to double tap the home button and swipe past the music, swipe past the volume and get to a brightness slider. It would also be better to have a toggle for wifi and bluetooth in that swipe tray as well.

MOKHAN
It's little things like the metallic slider that fuel the iPhone's unmatched success.
Score: 31 Votes (Like | Disagree)

lmddawson
such a tiny feature, but that metallic slider sure is pretty damn clever :p
Score: 29 Votes (Like | Disagree)

i'm not in the market for an iPad at the moment, but if i ever get one i would love to have the presence of a guest account.

the iPad sure would be left on the coffee table for everyone else to be used, but i wouldn't want anyone to have access to my personal stuff like pictures and messages and such.
Score: 18 Votes (Like | Disagree)

... Additionally, users aren't kicked to the home screen when buying or updating an app in the App Store.


That alone makes me happy. It's always been a bit of an annoyance to me.
Score: 18 Votes (Like | Disagree)
Read All Comments