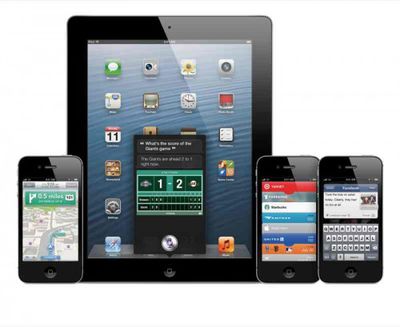 At today's WWDC keynote event, Apple announced the next version of its operating system for the iPad, iPhone, and iPod touch. iOS 6 will feature new functionality for Siri, Facebook integration, a revamped Maps app, Shared Photo Streams via iCloud, and more.

Facebook integration will be much like the current Twitter integration in iOS 5 with a system-wide log-in and the ability to quickly post from within apps. Contacts can be updated automatically using information obtained through Facebook. Third-party developers will be able to add this functionality easily with a public API.

A new Do Not Disturb mode allows users to schedule when notifications should not cause any sounds or visual alerts. The iPhone's Phone app will get new options to reply with a text message or prompt a reminder to return a call later when an incoming call arrives.

Shared Photo Streams lets you choose photos to share with selected family and friends. Shared photos can be viewed by others on iOS devices, iPhoto and Aperture on a Mac, or on the web or through an Apple TV.

Passbook is a new wallet app that will consolidate payment cards and electronic tickets. For example, customers at Starbucks can make payments using their Gold Card through Passbook. Also, movie tickets purchased through Fandango can be redeemed through Passbook. Airline boarding passes and even sporting event tickets will be accessible through Passbook as well. A new API will offer developers access to Passbook.

As expected, Apple has revamped the Maps app with its own map data. It will offer integration with Yelp for business listings and traffic information sourced anonymously and in real-time from iOS users. Turn-by-turn navigation will also debut in the new Maps app and guidance can be triggered by Siri.

ryanmcv
Disappointed that they are no longer supporting the original iPad. The iPhone 3GS is older and less powerful, so I'm not sure what the issue is.
Score: 19 Votes (Like | Disagree)

wcuthbert
God dammit, my iPad 1 is just over 2 years old and they're already dropping support for it. Throw these new features in my face and then tell me I have to spend another $600 to get them.
Score: 18 Votes (Like | Disagree)

In the photo it looks like there's a native clock app for iPad.
Score: 17 Votes (Like | Disagree)

Disappointed that they are no longer supporting the original iPad. The iPhone 3GS is older and less powerful, so I'm not sure what the issue is.


Well the difference is the iPhone 3GS is still currently being sold by Apple. The original iPad hasn't been sold for over a year.
Score: 15 Votes (Like | Disagree)


"A brief recap of Apples innovation in the last few iOS
versions:

Voice dictation  Stolen from Android, Siri was nothing more
than using Androids idea and one-upping them

You can now ask Siri how tall LeBron is  Ok

Homescreen actions when a call comes in  Stolen from
Android

Do Not Disturb mode  Stolen from Cyanogen (aka Android)

I would also like to add Apple ticket app is pretty similar to Google Wallet for Android, so really, what has Apple done lately?? How ironic they sue everyone for supposedly copying them, but yet they themselves clearly copy more than anybody.


Maybe you should buy a Samsung then and stop reading MacRumor's.
Score: 13 Votes (Like | Disagree)

jjhny
I want facebook dis-integration. I want to be able to turn it off. Most people, except the hardcore narcissists are getting sick of facebook.

Try ghostery for safari and see facebook track you at almost every site you go to.