Just three days after the announcement of the new MacBook Pro, developers have begun updating their software packages with support for the new Retina display. Until software is updated, text and images are generally pixel doubled, making everything displayed within those apps look somewhat fuzzy on the ultra-high resolution display.

Google has built Retina support into the nightly build of Chrome -- a continually updated beta release -- but says in a blog post that the Chrome team has "further to go over the next few weeks." 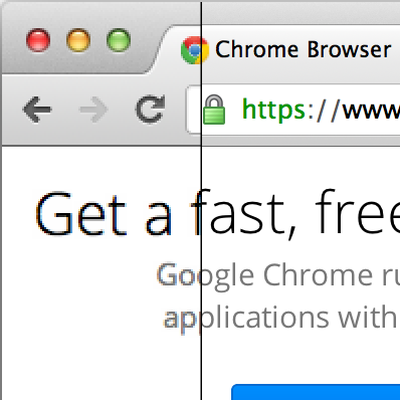 Retina support will also be added to multi-format video player VLC in the next release of the software, version 2.0.2.

This way, both video and subtitles or other overlays will be rendered at the display's native resolution leading to a greatly improved viewing experience.

If you're one of the lucky guys to have a MacBook Pro with Retina Display already, you're welcome to check out tomorrow night's nightly builds (CEST).

When the MacBook Pro with Retina Display was announced, Apple disclosed that it had been working with major developers like Adobe, Autodesk, and Blizzard to enable Retina support in their apps, but it will likely take some time for major apps to gain Retina support.

applesith
Macs are in the minority for PC marketshare and this new MBP is a minuscule part of that small percent. But it's making everyone jump.

Don't you think that eventually all computers across all brands will move to very high resolution screens like this? Enhancing the apps now only makes good sense for the future.


Very true, but you have to ask, if Acer, HP, or Samsung put this out - would everyone have jumped as quick? :)
Score: 5 Votes (Like | Disagree)

GenesisST
Funny, because I remember someone criticizing Google because Chrome didn't get the instantaneous benefit for text because of their rendering engine...

<sarcasm>But I guess it was because it is Google... </sarcasm>

EDIT: I guess I wasn't clear. I meant that their rendering doesn't benefit from built-in text rendering, but they added support for retina fast enough.
Score: 4 Votes (Like | Disagree)


Kind of the LAST application that would be on your list for 'retina' capability...

Your videos arent going to be sharper which is 99% of the reason why you use VLC.
Score: 4 Votes (Like | Disagree)

Kind of the LAST application that would be on your list for 'retina' capability...

Your videos arent going to be sharper which is 99% of the reason why you use VLC.


Yeah but subtitles are going to look fantastic! :)
Score: 3 Votes (Like | Disagree)

Except only WPF apps get that fully - GDI apps just get the whole thing blown up, the OS renders text before magnification. And most stuff is GDI, still. (Even though Microsoft backported WPF to WinXP, specifically so that devs would write WPF apps.)

Or are OS X apps getting blurry text on HiDPI, even when the OS is rendering the font?


So what you're saying is that Microsoft went out of their way to give developers the tools they needed to make High-DPI apps, and developers ignored it and kept doing things the old way.

Reminds me of the companies that were still using PPC-dependent installers for printer drivers or OS X apps for 10.6!
Score: 3 Votes (Like | Disagree)
Read All Comments