At WWDC today, Apple introduced a third line of notebook computers that Phil Schiller called the "Next Generation MacBook Pro." He noted that the company was "willing to discard old, legacy things" to make a new notebook that was radically thin and light. An Apple video called it "the very best computer that we've ever built." 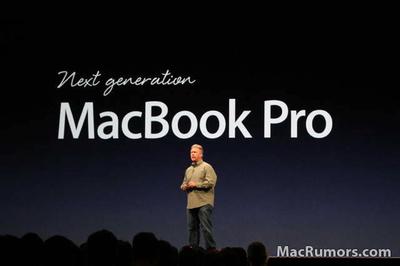 The new MacBook Pro -- which is in addition to the existing line of Pro's, which was also updated today -- is built around a 15.4" Retina display at a 2880x1880 resolution, 220 ppi with 5,184,000 pixels, with a display that is built directly into the unibody construction to make the notebook lighter.

It includes quad-core Ivy Bridge processors up to 2.8GHz and turbo boost up to 3.7GHz, up to 16GB of MacBook Air-like non-upgradable 1600MHz RAM, and a maximum of 768GB of next generation flash storage. The new Pro weighs in at 4.46 pounds and is 0.71" thick, but does not include a MacBook Air-like tapered body. There is no optical drive.

Apple has developed a new type of fan to keep the machine cool. It uses an asymmetrical blade system to cool the machine while being as quiet as possible. Apple claims the thermal management system operates in a way that is nearly imperceptible to the user.

Apple claims 7 hours of battery life with 30 days of standby time. It includes an SD slot, HDMI, and a USB 3.0/2.0 combo port on the right side, and a MagSafe power port, two Thunderbolt ports, another USB 3.0/2.0 port and a headphone jack on the left. Apple will soon begin offering a Firewire 800 and Gigabit Ethernet to Thunderbolt adapters. The machine also includes "the best stereo speakers ever put into a desktop or notebook" and dual microphones.


Pricing begins at $2,199 for the base model with the Retina display, a 2.3GHz quad-core Ivy Bridge i7, 8GB of RAM, a NVidia GeForce GT 650M 1GB graphics card, and 256GB of flash storage. The Next Generation MacBook Pro begins shipping today.

Regarding the Retina display, Apple will ship a special build of Lion with HiDPI support built-in, and will include updated versions of iPhoto, Mail and Safari to support the increased resolution. Final Cut Pro and Aperture are also receiving updates as well. Apple has been working with major developers to get their apps updated, including Adobe Photoshop, Autodesk's AutoCAD, and Blizzard's Diablo III.

charlieegan3
Now lets let the industry try and catch up for a whole year, again.
Score: 51 Votes (Like | Disagree)

toshgiles
The screen is hardly the draw for me...

The thin body, lack of optical-dinasaur drive, better battery, and power are what I want!!

I agree, total FAIL! Why only slimmer?


Ah, the old "list one feature and pretend it's the only new feature" trick.
Score: 38 Votes (Like | Disagree)
Read All Comments