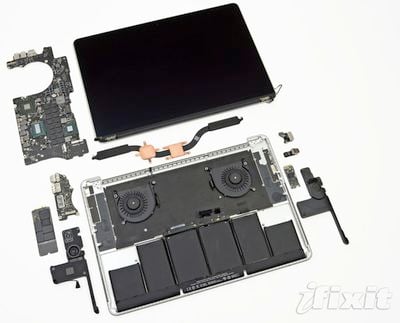 Apple of course showed off a fair bit of the machines internals during the keynote in order to promote all of the innovations included inside, but iFixit's teardown still provides an interesting hands-on look at the internals.

Unsurprisingly, the Retina MacBook Pro is not designed to be user-accessible, with the slim form factor requiring a number of proprietary components that are designed and assembled for maximum space efficiency rather than upgradeability and repairability. This has resulted in iFixit dubbing the machine "the least repairable laptop we’ve taken apart".

Taking a number of cues from the MacBook Air, the new MacBook Pro uses RAM soldered directly onto the logic board, as well as custom solid-state drives that include a new connector incompatible with existing third-party drives on the market.

Front of Retina MacBook Pro logic board with CPU (orange), NVIDIA graphics (red), and RAM (green)
Apple has even taken to gluing the large battery into the body of the Retina MacBook Pro, with iFixit ultimately giving up on trying to remove it for fear of puncturing a battery cell. The glued-in battery pack also covers the trackpad cable, making it nearly inaccessible and susceptible to damage if users attempt to remove the battery.

Otherwise, the internals of the Retina MacBook Pro are fairly straightforward, with a large and densely-packed logic board with left-side ports integrated, a separate I/O board for the right-side ports, the asymmetric fan touted by Apple, and custom speaker assemblies.

TimUSCA
If AppleCare wasn't justifiable before, it is now.
Score: 61 Votes (Like | Disagree)

Tronic
So if you have any battery problems they essentially have to replace the entire machine?
Score: 59 Votes (Like | Disagree)

PBP
Well i guess no MBP retina for me then :rolleyes:
Non removable ram and ssd sucks ass, absurd prices for memory/ssd upgrade in the online applestore
Score: 55 Votes (Like | Disagree)

Pentad
I'm not happy with them moving everything to proprietary.

DaveN
I would have at least liked the ram and 'ssd' to be upgradable. Those are the only things I upgrade anyway. As the previous poster noted, it sure makes Applecare more justifiable.
Score: 32 Votes (Like | Disagree)
Read All Comments