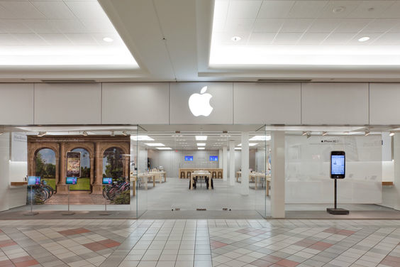 A new Apple Store is coming to South Loop according to a Chicago city alderman. The store, which may be coming to the Roosevelt Collection, would join flagship stores Lincoln Park and North Michigan Avenue as Chicago's third store within the city limits. Apple has seven stores in Chicago suburbs.

The story, reported by Crain's Chicago Business, quotes Alderman Robert Fioretti (2nd) as saying Apple was "coming close" to moving into the complex, located at Wells Street and Roosevelt Road.

Wow, the elements in that picture are so misaligned:
The ceiling and floor match up perfectly with each other, but they they need to be moved to the right so that they line up with the entrance.


It looks like that particular Apple Store is inside of a shopping mall. I don't think Apple has much control over the floor tiles that the shopping mall uses.

Anyways, the present Apple Stores in Chicago are beautiful, so I can't wait to see what they do with this new one.
Score: 3 Votes (Like | Disagree)

I wish they would open a store in downstate Illinois. Maybe somewhere in the Champaign, Springfield, Bloomington area. Having to drive to Chicago / St. Louis / Indy from here is a haul just to go to an Apple Store.


There is a crappy store on green st in champaign
Score: 2 Votes (Like | Disagree)

Well I guess my tip/submission[with photo] about the new Apple Store in Sydney, Australia has been ignored... :confused:

Densik
Long-time lurker here. I happen to live in the same neighborhood as this location, so I'm familiar with the layout. The space is within a large retail/housing/movie theatre complex that was finished just as the housing bubble burst, around 2008 or 2009. So far, the theater is the only commercial tenant, the rest is unleased. As far as I can tell, most o te retail space is unfinished, so Apple would have wide latitude in doing what they wanted with it.

If this turns out to be true, the only unhappy person will be my wife, who thinks I shovel enough money into Apple's coffers as it is.
Score: 2 Votes (Like | Disagree)

You cant really tell the mall to move their floor and ceiling and align them....the apple store itself is aligned perfectly and symmetrically like always

According to Asymco's calculations, Apple spends almost 10 million dollars per store on average for refurbishing. I am sure they can tell the mall to rip out the $10k worth of tiles if they wish. :)
Score: 1 Votes (Like | Disagree)

Wow, the elements in that picture are so misaligned:
The ceiling and floor match up perfectly with each other, but they they need to be moved to the right so that they line up with the entrance.


You cant really tell the mall to move their floor and ceiling and align them....the apple store itself is aligned perfectly and symmetrically like always
Score: 1 Votes (Like | Disagree)
Read All Comments

Tuesday September 27, 2022 8:05 am PDT by Hartley Charlton
An Apple Watch Ultra user has modified their new device's casing to add a brushed finish and remove the orange color of the Action Button in an effort to make it more visually appealing. The Apple Watch Ultra offers the first complete redesign of the Apple Watch since the product line's announcement in 2014, and while the design has been met with praise from many users, some have criticized...
Read Full Article • 152 comments