Back in January, Belkin officially unveiled its Thunderbolt Express Dock, a single-cable hub priced at $299.99 and offering a variety of USB, Ethernet, and FireWire ports to provide easy desktop expandability for portable machines. But with the product not scheduled to ship until September, Belkin left itself with plenty of time to continue tweaking its design and today announced that it has revised the specs to boost the previous USB 2.0 ports to USB 3.0, as well as add new eSATA and audio in ports. The company has also announced a one-meter Thunderbolt cable to aid in connectivity.

"As more hardware companies announce plans to incorporate Intel's Thunderbolt technology into their products, we aim to create quality accessories that take advantage of Thunderbolt's blazing fast speeds and other benefits," said Martin Avilla, general manager of Belkin's core business unit. "Over the past few months, we have really listened to our end users and created a one-meter cable and refined the dock to make it an even better desktop solution, which we believe will make Belkin a go-to provider for Thunderbolt accessories when they launch in the summer and fall."

Belkin's improvements to the Thunderbolt Express Dock come with a cost, however, as the retail price has risen from the previous $299.99 to $399.99. The Thunderbolt cable will run an additional $44.99.

Just a few days ago, Matrox announced its own Thunderbolt docking station priced at $249. The Matrox DS-1 has only one USB 3.0 port alongside a pair of USB 2.0 ports, and also lacks FireWire and eSATA ports while providing video output via DVI rather than HDMI. Perhaps most importantly, Matrox's solution does not include a second Thunderbolt port for passthrough, meaning that the docking station must be placed at the end of any daisy-chained peripheral setup.

Simplicated
Really, who pays $400 for a hub without a cable included, which brings the total price to at least $450.
Score: 60 Votes (Like | Disagree)

dysamoria
It was unacceptable at $300. Now it's just offensive.

This kind of pricing will kill thunderbolt. I'm unaware of any other interface that was this costly to the end user.
Score: 46 Votes (Like | Disagree)

azentropy
+1 to all the posts saying the price is too high.
Score: 44 Votes (Like | Disagree) 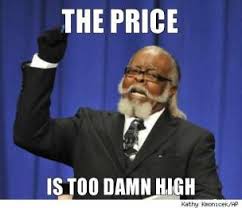