Google to Show Off 'Next Dimension' of Maps on June 6

With Apple reportedly abandoning Google in favor of its own mapping solution for iOS 6, 9to5Google reports that Google will be holding an event on June 6 to show off "The Next Dimension of Google Maps". The event comes just five days before Apple is expected to show off details of iOS 6 at its Worldwide Developers Conference keynote.

At this invitation-only press gathering, Brian McClendon, VP of Google Maps and Google Earth, will give you a behind-the-scenes look at Google Maps and share our vision. We’ll also demo some of the newest technology and provide a sneak peek at upcoming features that will help people get where they want to go – both physically and virtually. We hope to see you there. 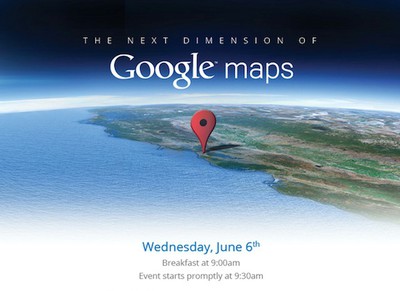 Apple has relied on Google to provide the mapping functionality in iOS since the iPhone's initial launch back in 2007. But as competition between the two companies has ramped up, Apple has been working to strengthen its expertise in mapping with the acquisition of several small companies and has been gradually moving certain location and mapping services in-house. That transition is expected to culminate in iOS 6 with the core mapping application shifting from Google to Apple.

The timing of Google's event naturally leads to speculation that it has been specifically planned to upstage any Apple announcement about mapping in iOS 6 and to show what users will be missing out on with the transition by Apple.

Mortalias
Only 30 minutes to eat breakfast?

nfl46
Damn, I guess we can confirmed that Apple really did drop Google Maps from their new iOS.

B.A.T
Can't wait to see both versions of maps. Competition is a good thing.
Score: 37 Votes (Like | Disagree)

The shame is that Google is known to have one of the better mapping solutions; they just need to relentlessly make it better.

By scheduling a 'demo of things to come soon' on the coat tail of a Apple's presentation it makes them look like a bunch of followers with a 'me too' solution...they shouldn't need to do that, they are (were?) already in the lead.

nick_elt
Would google maps be available as an app anyway?
Score: 26 Votes (Like | Disagree)
Read All Comments