The Palo Alto Online has unearthed plans for a new glass-enclosed retail store going in near the current Stanford mini-store at the Stanford Shopping Center in Palo Alto, CA.

The store will have three floor-to-ceiling glass walls enclosing the front of the store with a visually free-floating white roof overhead. This is a similar design to the new store being built in Portland, OR, as well as a new store in Aix-en-Provence, France. What makes this store unique, however, is the interior. 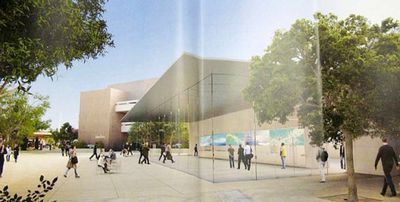 In the middle of the store, it appears that Apple's architects have placed a stone wall that separates the store into two distinct areas. A front area enclosed by glass walls, and a rear space that will include the standard Apple Retail Store product tables and counters.

From the Palo Alto Online:

One seasoned industry observer who had viewed the early drawings called the building design exquisite. "It makes an elegant and dramatic statement. It is destined to become Apple's flagship store," he said. The structure features a tall glass cube with an overhang that extends well beyond the building. "It makes the space between the outside and the inside almost indistinguishable," the source said, adding that it will bear some similarity to New York's Apple Store Fifth Avenue, which also has a distinctive glass cube as an entrance.

The new store replaces the Rugby Ralph Lauren and Williams Sonoma Home stores that were previously in the space. IFOAppleStore notes the store, designed by Bohlin Cywinski Jackson, is expected to open by the end of the year. The existing Stanford mini-store will be shuttered once the new location opens.

Renzatic
I see that and think...

east85
This is like a smack in the face to that poor old lady that ran into the apple store glass door a few weeks back! :mad:
Score: 3 Votes (Like | Disagree)

And a good though at that.

In fact, that thought was so well thought out, I think MR can do a cover story on it.

Today, forum user scottdan1200 on MacRumors had a brilliant insight.

While sounding like he really knew something, he shrugged it off at the end with:

Many people have discussed the possibility of Apple releasing an "iTV" in time for the holidays this year.

I should totally get hired to start writing for MacRumors.
Score: 2 Votes (Like | Disagree)

People forgot about earthquakes in California.

I doubt that. There's building code they need to follow.

For certain, some construction techniques have been banned in California due to earthquake hazards, but they are for things like brick masonry. Much of these regulations came about after the 1989 Loma Prieta earthquake which destroyed many of the older brick structures in Santa Cruz, particularly in retail stores.

Getting showered by safety glass is better than having a brick wall bury you.

Note that the most earthquake-prone country in the world -- Japan -- has not banned the use of glass.

The biggest hazard in earthquakes is fire, followed by tsunami (not applicable for Stanford/Palo Alto). Fire is what destroyed San Francisco in 1906.

Glass and metal doesn't burn. Wood framing and plywood? You bet. The use of wood shakes as roofing material has also been deprecated in this state.
Score: 2 Votes (Like | Disagree)
Read All Comments