As noted by ifoAppleStore, Apple is continuing its trickle of retail store openings this week with a new location opening on Friday, May 25 in Paris. The new Les Quatre Temps store will be Apple's sixth in the Paris metropolitan area. 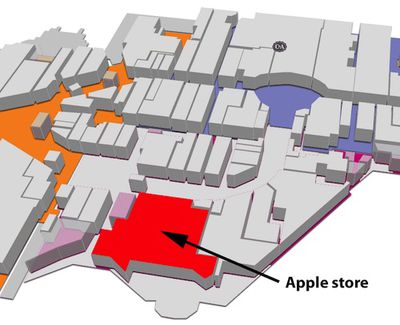 The huge store will be located on Level 1 adjacent to the Gap store. The five-level mall is located in the La Défense district of Paris, along the north extension of the Champs Elysées, and sits adjacent to the iconic Grande Arche building.

No square footage measurement for the new store has been officially released, but based on mall plans and a photo of the construction barrier posted by MacGeneration back in March the store does appear to be one of Apple's larger mall-based locations.

Overall, the store will become Apple's eleventh in France, breaking a tie with Italy for the position as Apple's fifth most popular country for retail store construction, following the United States, United Kingdom, Canada, and Australia.


Overall, the store will become Apple's eleventh in France, breaking a tie with Italy for the position as Apple's fifth most popular country for retail store construction, following the United States, United Kingdom, Canada, and Australia.


It's not based on popularity, it's based on sales forecast and outside of the US it's mostly big cities with lots of tourism.

Five floors!? I don't know that much about malls, but I consider two floor malls to be rather large. I've been to a three floor mall before... that was behemoth size. I can't think of a word to describe a mall with five full floors (crazy?)

... Oh, are all of the floors full of stores? It just occurred to me that lots of malls have additional, off-limits-to-consumer-floors for office and business space and stuff.


There are lots of shopping Malls in Asia with more stories then 2-3, Singapore for instance has plenty of them.
In the US most shopping Malls are in the suburbs with lower land prices, in Asia most of them are in city centre's and have high ground prices and therefor are multi story buildings.
Even here in Bandung Java Indonesia most of them have more than 4, some of them even 10.
Score: 1 Votes (Like | Disagree)

Please, open at least one in Czech Republic.


That would give Apple a chance to have an Art Nouveau style Apple Store in Prague. I visited Prague back in 1999 and I think it is one of the most beautiful cities.
Score: 1 Votes (Like | Disagree)
Read All Comments