Apple to Upgrade iCloud with Photo Sharing, Notes and Reminders on iCloud.com

The Wall Street Journal briefly reports that Apple is planning to unveil an upgrade to iCloud at next month's Worldwide Developers Conference (WWDC), with one of the main new features being a photo-sharing functionality.

The new features, expected to be announced at Apple's world-wide developer conference beginning June 11, will allow iCloud users to share sets of photos with other iCloud users and to comment on them, these people said. Currently, users can only store one set of photos in iCloud through a feature called Photo Stream, which is designed to sync those photos to other Apple devices, not share them.

Apple also appears to be looking to extend the Photo Stream feature to videos, allowing users to access their personal videos through iCloud. Finally, the report confirms that the Notes and Reminders icons spotted on a beta.icloud.com site late last week will be associated with new functionality to sync those services via iCloud for access through both dedicated apps and the iCloud website.

All of the new iCloud features are expected to make their way into iOS 6, which is also expected to be previewed at WWDC.

basesloaded190
This is good and all, but I am way more interested to see what iOS 6 will bring us.
Score: 20 Votes (Like | Disagree)

Stridder44
Add in "comments" and "likes" and an individual iCloud user wall and you have a watered-down version of Facebook (only it's run by Apple). I honestly wouldn't mind something like that.
Score: 7 Votes (Like | Disagree)

gregwyattjr
I'm just glad that iCloud is already working so much better than MobileMe. Hopefully they'll keep it up!
Score: 7 Votes (Like | Disagree)

The elephant in the corner of the room is the lack of Pages/Keynote/Numbers functionality on Mac OS X. Until they really address that issue I think the 'new features' are really distractions from the holes that exist between their client (Mac OS X) and iCloud service.


Obviously, this is coming in Mountain Lion, so I don't think this Elephant is in the corner anymore. More like it's trudging out the door. 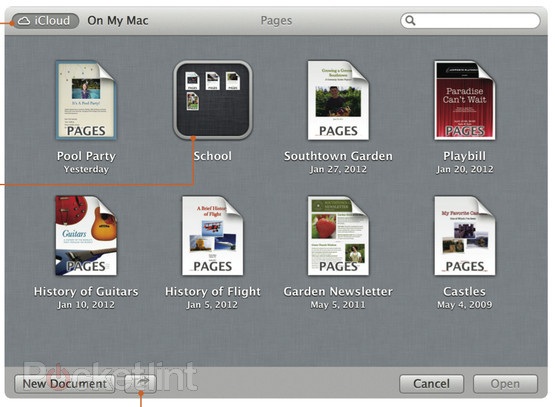 Thursday April 15, 2021 1:30 am PDT by Sami Fathi
Bloomberg's highly-respected Mark Gurman says that he expects nothing "particularly innovative" or "extraordinary" to launch at Apple's "Spring Loaded" event next week, Tuesday, April 20. Gurman made the remarks during an interview for Bloomberg Technology, in which he reaffirmed that Apple will launch a new 11-inch and 12.9-inch iPad Pro, with the higher-end model featuring a brand new...
Read Full Article • 193 comments

Friday April 16, 2021 6:13 am PDT by Hartley Charlton
A video purporting to be of the third-generation Apple Pencil has today been shared online, showing a glossy finish that mirrors previous leaks. New ✏️ ready to 🚢 #AppleEvent @TommyBo50387266 pic.twitter.com/s4RCDwDi5M— 漢尼斯·拉斯納 🇨🇳 (@ileakeer) April 16, 2021 The brief video from Twitter account @ileakeer, spotted by 9to5Mac, shows an Apple Pencil with a glossy finish much like the...
Read Full Article • 51 comments