Antivirus firm Symantec has published a new blog post examining how the Flashback malware affecting hundreds of thousand of Macs has been generating revenue for its authors by hijacking users' ad clicks. According to the report, the widespread nature of the infection means that malware authors could have been generating up to $10,000 per day from the scheme at its peak based on previous analysis of malware click redirection.

The Flashback ad-clicking component is loaded into Chrome, Firefox, and Safari where it can intercept all GET and POST requests from the browser. Flashback specifically targets search queries made on Google and, depending on the search query, may redirect users to another page of the attacker's choosing, where they receive revenue from the click . (Google never receives the intended ad click.)

Symantec's work on the ad-click hijacking aspect of Flashback comes after Russian firm Dr. Web, which was responsible for the initial publicity about the malware, published its own report examining some of the early data on infected computers seeking to connect to command-and-control servers.

The report looks at nearly 100,000 connections that came in on April 13, finding that close to two-thirds of the infected machines identified themselves as running Mac OS X Snow Leopard, which was the last version of OS X to ship with Java enabled by default. OS X Lion does not include Java by default, and thus was responsible for only 11% of infections seen during the survey period. 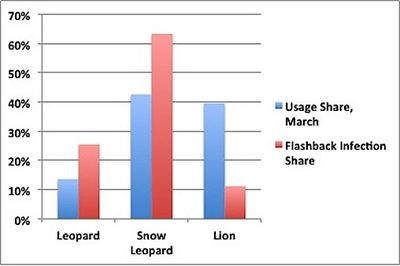 [W]hile Snow Leopard's and Leopard's infection rates are higher than their usage shares, the opposite's true of OS X 10.7, or Lion. The 2011 OS accounted for 39.6% of all copies of OS X used last month, yet represented only 11.2% of the Flashback-compromised Macs.

Dr. Web's data on OS kernel versions being reported from infected Macs also demonstrates that many Mac users do not keep their systems up-to-date, with roughly 25% of Snow Leopard and Lion systems seen in the survey reporting themselves as at least one version behind Apple's most recent updates (10.6.8 for Snow Leopard and 10.7.3 for Lion).

In many cases, upgrading is not possible.
Some of us with older hardware are SOL due to the lack of compatibility with older equipment or software that is still not supported under Lion.
Canon has yet to release a stable version of their EOS tools for Lion, so I am forced to keep a laptop with SL on it just so I can use the tools.
Score: 13 Votes (Like | Disagree)

Mike Oxard
Apple should follow the money, find out who the perps are then send the boys round to give them a good old fashioned kickin'
Score: 12 Votes (Like | Disagree)


What if upgrading is not an option? One thing I really dislike about Apple is their lack of support for legacy products. Microsoft still maintains XP, why can't Apple do so for their older OSs?
Score: 9 Votes (Like | Disagree)


Will you be paying for the upgrade to 10.7 for me? I'm not talking about the paltry $29... First, since rosetta support was dropped, I will need about $150 to purchase Intel capable replacement software. Second, is that my flat bed scanner also uses PPC software, which can't be upgraded, so I will need a whole new unit. Comparable scanners are running around $200. Will Paypal work for the $350? If you don't pay, why? Do you feel that it is a stupid waste of money when 10.6 does everything for free?
Score: 8 Votes (Like | Disagree)

marksman
What ad network is paying out for these clicks? Most ad networks pay out monthly. Has to be a scummy ad network to not deny payments to this kind of behavior.
Score: 8 Votes (Like | Disagree)

John.B
46% of statistics are made up on the spot.
Score: 7 Votes (Like | Disagree)
Read All Comments