As noted by Macgasm, Apple has begun notifying at least some MobileMe users of a new upgrade program offering a free copy of Mac OS X Snow Leopard. The offer is being made to provide users of machines running older versions of Mac OS X with a reduced-cost pathway to upgrade to OS X Lion, which is required to take full advantage of the features of iCloud. 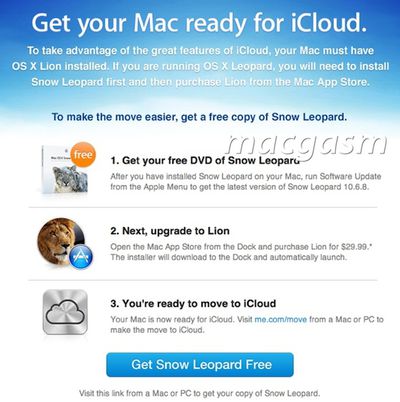 With OS X Lion being distributed via the Mac App Store, users need to have Mac OS X Snow Leopard installed on their systems in order to access the store. Consequently, users still on Mac OS X Leopard or earlier would have to pay $29 to upgrade to Snow Leopard via disc and then an additional $29.99 to upgrade to Lion via the Mac App Store in the absence of the new upgrade program. With MobileMe set to be discontinued in favor of iCloud as of June 30, Apple is clearly seeking to encourage MobileMe users to move their accounts to iCloud.

In an article sent to MobileMe customers, Apple has recommended that potential customers get in touch with Apple to receive a free DVD of Snow Leopard so that users can upgrade to Lion, and move to iCloud. All you have to do is follow this link, log in to MobileMe with your Mobile Me account, and fill out your mailing information. Apple will then send you a Snow Leopard DVD for free.

Mac OS X Snow Leopard remains available in the Apple online store for $29, suggesting that the offer is a targeted program intended for MobileMe members who need to upgrade their systems in order to move to iCloud rather than a general price cut for all purchasers of Snow Leopard. 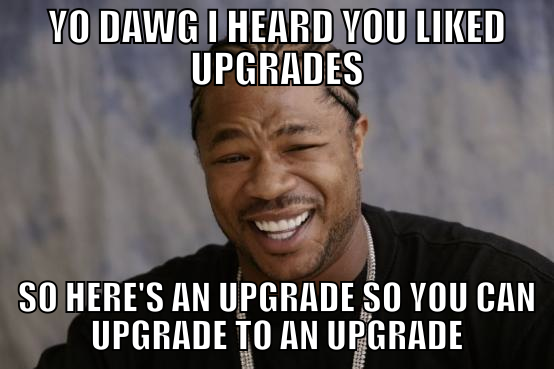 palmerc2
I have no desire to upgrade to Lion, in fact it's the opposite.

Why not just make iCloud available on Snow Leopard??
Score: 35 Votes (Like | Disagree)

Just go to the Lion and Mountain Lion forums and you'll see a lot of complaints about bugs, lag, etc.

Oh come on, are you telling me people didn't post a lot of complaints in the Leopard/Snow Leopard forums? Back when snow leopard was 10.6.0-10.6.3 (the same number of iterations as Lion today), I saw a lot of problems about crashes and bugs and people complaining about how SL was not a "better Leopard". Same with the Leopard release. You wouldn't believe the amount of Time Machine issues people had. People rarely post about good experiences on those threads. More people will post if they actually have a problem. The rest of us are too busy enjoying Lion to post our experience. :)
Score: 25 Votes (Like | Disagree)

MNT
It seems like it would've been easier to offer the USB key version of Lion for $29 to MobileMe customers.:confused:
Score: 19 Votes (Like | Disagree)

I have a 4 year old Macbook Pro. Lion works just fine for me on 4GB of ram. The fact that you compare it with Vista tells me that you didn't experience the enormous amount of troubles the consumers and especially the businesses had to go when they upgraded to Vista. My only criticism of Lion is Mission Control. It sucks compared to Expose but I doubt people who have never tried Expose will notice.

And it's not terribly surprising Apple wants more people on iCloud. iCloud to me is a more complete package than Mobileme ever was. Plus, if the customer has iCloud, Apple can just download their data off of the cloud to make replacements/repairs easier. The consumer in turn benefits from the better experience as well. That's hard when you don't have iCloud.


He's only kidding. Really. No one could post that with a straight face.
Score: 17 Votes (Like | Disagree)

swingerofbirch
Wow, they are really committed to this pretty convoluted update path. The majority of customers will go along with this upgrade path, but can you imagine what it will be like walking through helping customer's back up their Macs (prudent before any software update), helping them install Snow Leopard, then assisting them in updating to the latest SL version, then helping them log into the Mac App Store to download Lion? It may be hard to believe given the proficiency among users here in Mac products, but for some customers, just figuring out how to sign into the Mac App Store will be a 30-minute phone call to Apple: "My Apple ID, is that what I use on the Google? Or is that my 3G password?" When MobileMe shuts down, there is going to be a "bag of hurt," including for the people taking phone calls related to supporting these customers.

I can imagine the calls right now,

Customer: "I have to back-up my computer and install this Snow Leopard just so that I can keep my e-mail I've been paying a $100 a year for for the last 10 years?!?!"

Advisor: "Actually after backing up your computer, installing Snow Leopard, you'll need to buy Lion, and after installing that you can keep your e-mail service."

Personally, I finally gave in and updated to Lion, but before I did, I frequently contacted Apple to verify my MobileMe (and later iCloud) e-mail would continue functioning with Snow Leopard. I was given cagey answers, but the general consensus was that it would not. I don't believe that is the case, but nonetheless, how difficult would it have been for Apple to update Snow Leopard to work with the iCloud e-mail service and the calendar, contact, syncing, etc? After all, Apple is supporting Windows Vista! Windows Vista is the operating system Apple spent hundreds of millions of dollars lambasting on television. If it's capable of using iCloud, why not Snow Leopard, the OS which Apple advertised as being so much better than Vista?

Apple has historically been pretty bad with maintaining any sort of online services for any length of time (the exception being the iTunes Store). They deprecate services before there's even a fully functional alternative. I have accounts with Tripod from the late 90s and they are still storing all of my files without interruption. I have a Gmail account as a back-up e-mail, and I don't have to worry about losing e-mail if I don't switch to a renamed service or if I am using a slightly older operating system.

Apple should care a little more about polishing Lion rather than trying to get everyone onto it.

With Apple everything is supposed to "just work." But honestly, the upgrade path to iCloud would be more simple if Apple sent all these users a copy of Windows Vista and had them install it via Boot Camp. It would probably require about the same number of steps!
Score: 16 Votes (Like | Disagree)
Read All Comments