ChangeWave Research today released the results of a survey addressing users' experiences with the new iPad, finding that 98% of the professional and early-adopter consumer audience targeted by the firm rate themselves as either "very satisfied" (82%) or "somewhat satisfied" (16%) with the device. The number compares favorably to the already-strong 95% satisfaction rating (74% very/23% somewhat) for the iPad 2 in the weeks leading up to the new iPad's introduction. 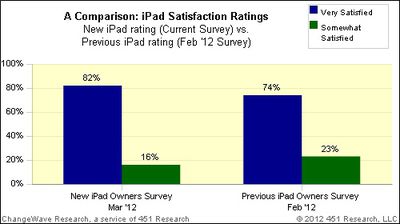 Among the key features of the new iPad is obviously the Retina display, with 75% of respondents citing it as one of their favorite features. Other top features such as long battery life, LTE capability, and device speed registered in the 20-22% range. On the negative side, price was the biggest issue, with 26% of respondents noting device cost and 23% of respondents citing wireless data costs as their key dislikes. Other mentioned drawbacks such as size/weight and storage capacity all registered with under 10% of the surveyed customers.

Interestingly, ChangeWave also surveyed customers about any issues with heat on the new iPad, and was able to compare those results with ones obtained back in June 2010 regarding much-publicized antenna issues on the iPhone 4. The new survey found that 89% of users experienced no problems with heat on the new iPad, with none of the respondents who even experienced the problem citing it as a major one. This contrasts with the iPhone 4 antenna issue, where 35% of respondents reported at least some issues with antenna performance and 7% calling the issue a "very big" one.

ChangeWave's survey was conducted March 22-28 and included 200 owners of the new iPad. The sample size is a relatively small one, but the results should show at least a general perspective on how customers are viewing the device.

Meanwhile, influential ratings and reviews magazine Consumer Reports has released its new tablet ratings, giving the new iPad a "recommended" label and placing it atop the rankings among 9-12 inch models. The recommendation comes after the magazine noted some issues with heat on the new device, but ultimately feels that it "didn't find the temperatures to be cause for concern".

As a result of the standout performance of the new iPad's screen, we have recalibrated our standard of excellence for tablet screens. The iPad alone now receives an excellent overall score for display quality. A number of current models, including the iPad 2 (which remains on sale and is a fine performer), that received excellent scores under the past standard will now be adjusted to receive very good scores overall. Likewise, some models that received good scores may also be adjusted downward, and some overall scores have changed slightly.

Perhaps the only "negative" of the new iPad cited by Consumer Reports is the observation that the Retina display can "magnify imperfections" in low-resolution web content, with the magazine suggesting that in some cases such content appears worse on the new iPad than on the lower-resolution iPad 2.