Earlier today, we pointed to some teardown tidbits from Chipworks regarding the new iPad, including the observation that the A5X system-on-a-chip is being manufactured by Samsung and is using the same 45-nm process used for the A5 package in earlier devices. Also noted was a significant increase of about 36% in the area of the A5X compared to the A5. 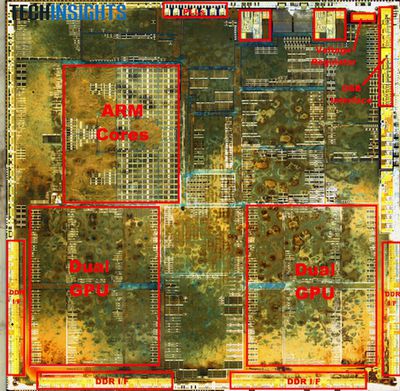 What should be noted is that the processor cores from ARM are identical in look but the extra real estate on the processors (the A5 measures at approx. 120 mm^2 vs. the A5X which measures at 163 mm^2) is accounted for by the the PowerVR SGX543MP4 GPU cores, of which they are paired in groups of two and then symmetrically opposed to each other.

By our calculations, the graphics cores take up roughly 25% of the A5X's surface area alone, compared to just 10% for the ARM cores that make up the application processor. The floorplan also reveals a number of other enhancements for the A5X, including additional DDR interfaces and architecture to support the boost in graphics horsepower.

dashiel
Correct me if Im wrong, but the iOS system libraries have access to OpenCL which uses the GPU to offload certain processes, so a quad-core GPU is a much bigger deal than just rendering 3D graphics and powering the retina display.

As has been stated ad naseum, Apples ability to get the industrial designers, interface designers, cpu & gpu engineers and software people all in the same room to hash out problems is going to produce real world advantages that belie specs and confound competitors. Nerds will moan, no one else will.
Score: 8 Votes (Like | Disagree)

Isn't it 4x pixel count, based on double the resolution in two dimensions?
Score: 6 Votes (Like | Disagree)

Someone in the AnandTech comments mentioned the A5X die is about the same size as the upcoming 22nm quad core Ivy Bridge processors. If this isn't evidence that Apple messed up by using a 45nm process (vs. waiting 2 months and moving to 32nm), I don't know what is.


Except that it's not 2 months is it? Apple have been making iPad's since the first week of January to have enough ready to ship in mid-March. Even assuming that a 32nm process works and can produce the vast amount of chips required right out of the gate you'd be looking at delaying the launch until, what, July at the earliest? Longer if you assume parts were being made before that assembly time.

And for what? No, really, what benefit does Apple get by doing that? A15 and PowerVR Series 6 wouldn't really be ready by then so the only benefit may be to go to a quad core A9 which a) would bring questionable benefits to the iPad anyway (how many apps really NEED quad core CPU's?) and b) would still get spanked by the A15 designs which would then have been only a few months away from launching. The third gen iPad is hardly a slouch and feels just as quick in day to day use as the iPad 2. No-one outside of spec geeks cares about the CPU and all Apple would have done is hand the advantage to Android as someone, most likely Asus or Samsung, would have got a high def screen out the door before Apple shipped the new iPad.

Don't get me wrong, more power is always nice but right now it's hard to see what Apple could have done differently. The roadmap is pretty clear right now: the fourth gen iPad will see an A6 based on the next gen architecture and probably receive a big ol' speed boost as a result. The iPhone 6 will certainly get the A6 as well. The one that's still an unknown right now is iPhone 5 but I wouldn't be surprised to see that get an A5 variant on 32nm as they're still going to be close to the wire to get Cortex A15 CPU's out in volume by late summer.

Sorry but when you're talking about using utterly unproven technology the moment it's available for a mass market product like the iPad, well, that seems like a massive and unnecessary risk to me.
Score: 5 Votes (Like | Disagree)

Someone in the AnandTech comments mentioned the A5X die is about the same size as the upcoming 22nm quad core Ivy Bridge processors. If this isn't evidence that Apple messed up by using a 45nm process (vs. waiting 2 months and moving to 32nm), I don't know what is.


What exactly is the problem with big die then? The actual device isn't any bigger because of that and the battery life is the same too (according to Apple, at least). You are making a big deal out of nothing.
Score: 5 Votes (Like | Disagree)