As expected, Apple today introduced an updated Apple TV offering support for 1080p video, which is now also available through the iTunes Store. The company is also rolling out an updated interface for the set-top box, with icon-based category buttons and large billboard-style artwork for content. 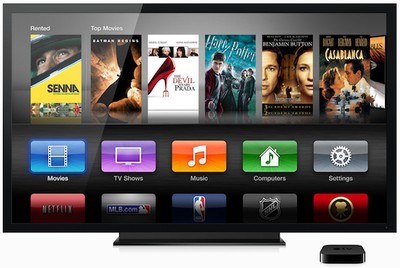 The new Apple TV maintains the same $99 price tag as its predecessor and is available for pre-order today. It launches on March 16th.

“People are going to love streaming movies and TV shows in 1080p with the new Apple TV, and photos look beautiful displayed at the maximum resolution of your TV,” said Philip Schiller, Apple’s senior vice president of Worldwide Marketing. “Apple TV is easier than ever to use with its new icon-based interface and the ability to access your purchased movies, TV shows and music right from iCloud.”

Apple's iCloud services have also been updated to support 1080p video, allowing users to stream their content to any linked device including the new Apple TV. AllThingsD notes, however, that not all studios are participating in the iCloud video streaming, with Fox and Universal having to hold out due to agreements with HBO.

potatis
To bad a new version of Handbrake was released one week ago. Now have to wait another year for an ATV3 preset.
Score: 13 Votes (Like | Disagree)

lunarworks
If an A5 chip and 1080p are the only new features, and the new UI is available to me, I'll hang onto my 2nd gen Apple TV for a little bit longer.
Score: 12 Votes (Like | Disagree)

After all these 2 years?

zed2
So can we upgrade the older iTV version 2 system to run this new interface? Is the only difference the 1080P?
Score: 11 Votes (Like | Disagree)

Unless Apple has something in that thing which they didn't reveal, it's still not besting the PS3. Pity, but then the PS3 with Playstation Media Server is superb.

250ish for PS3
100ish for 1TB HD ... Unless the prices have dropped back to the proper levels.
300 or more for a used Mac capable of running windows virtually

CmdrLaForge
Now I buy one. Finally after all those years.
Score: 8 Votes (Like | Disagree)
Read All Comments

Tuesday May 4, 2021 9:51 am PDT by Juli Clover
Just after Apple announced its AirTags, Tile CEO CJ Prober relayed his concerns about competing with Apple in the tracking space, and said that Tile would ask Congress to investigate Apple's business practices specific to Find My and item trackers. Prober this week did an interview with Bloomberg, where he further expanded on Tile's complaints about Apple and why he feels that Tile is...
Read Full Article • 423 comments