Apple today updated its Apple Store app [App Store] for iOS to version 2.1, adding several new features and making the app available in the Netherlands for the first time to support the Amsterdam store opening this week. 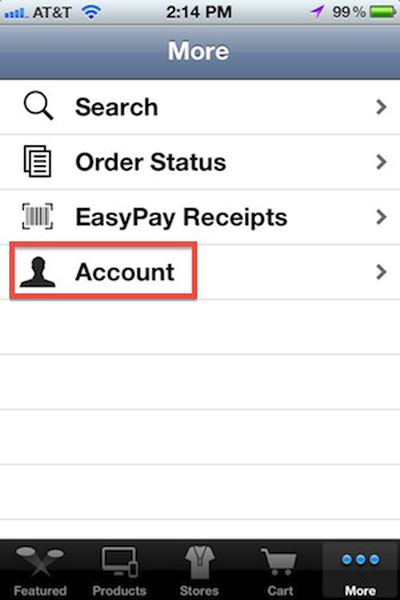 Among the most notable additions to the app is a new "Account" section where users can update their billing information and addresses as well as shipping addresses right from the app. Users have until now had to log into their accounts through the Apple website in order to update payment methods if they wished to change them for an in-store EasyPay purchase. Apple also touts the ability for customers in the United States to choose from any of the three iPhone carriers when purchasing an iPhone through the app.

- Choose iPhone plans from all three U.S. carriers — AT&T, Verizon, and Sprint (U.S. Only)
- Make your shopping experience even more convenient with new account management editing and billing options.
- The Apple Store app is now available in the Netherlands.
- Requires iOS 4.3.3 or higher.

Apple rolled out its EasyPay functionality in a major update last November. The feature allows customers to scan the barcodes of any self-service items at an Apple retail store and charge the purchases to their iTunes Store accounts, eliminating the need to track down store employees to conduct the transactions.

Battlefield Fan
Quick! Scan the files to find the mention about the 24 core iPad 3 coming out next week! Quick!
Score: 5 Votes (Like | Disagree)

how do we upgrade our app store app, its not under upgrades in the app storre

And yet still not Universal!

App Store changes tend to roll out over a time spancheck again in a little while.


Not really. I think Apple has the mentality that the apple website is good enough for the iPad, and a specific store app isn't needed. I tend to agree. It's unwieldly to access on the iPhone, hence the app. On the iPad, that isn't a problem. Which is why I don't see them making the app universal.
Score: 2 Votes (Like | Disagree)

I never found this app to be all that useful.

I used this app for the first time Saturday. Went to the Apple store to pick up a backup drive. Online, the item was $179.95 . In my local Apple store, it was $199.95. When I called the salesman's attention to the difference, he said he couldn't change the price. I went online, standing in the middle of the Apple store and bought the drive for less than I could have bought it in the store. I picked up the drive, showed my confirmation # and left with my purchase.

It worked great and was really fast.
Score: 2 Votes (Like | Disagree)

Adidas Addict
How is this a rumour? Surely an article that was meant to go on the blog, especially today when we have so many iPad 3 and Macbook Pro rumours:confused:
Score: 2 Votes (Like | Disagree)
Read All Comments