To Beat the Law of Large Numbers, Apple Must Expand Its Product Line

The New York Times today addressed Apple's record growth in both revenue and stock price in the context of the "law of large numbers".

Apple is so big, it’s running up against the law of large numbers.

Also known as the golden theorem, with a proof attributed to the 17th-century Swiss mathematician Jacob Bernoulli, the law states that a variable will revert to a mean over a large sample of results. In the case of the largest companies, it suggests that high earnings growth and a rapid rise in share price will slow as those companies grow ever larger.

If Apple’s share price grew even 20 percent a year for the next decade, which is far below its current blistering pace, its $500 billion market capitalization would be more than $3 trillion by 2022. That is bigger than the 2011 gross domestic product of France or Brazil.

Put another way, to increase its revenue by 20 percent, Apple has to generate additional sales of more than $9 billion in its next fourth quarter. A company with only $1 billion in sales has to come up with just another $200 million.

Apple has posted annual revenue growth of 16%, 56%, and 69% over the past three years respectively, with sales rising from $39 to $61 to $103 billion. Staggering growth for a company this large, but Apple seems to be continuing the trend for fiscal 2012. Apple reported more than $46 billion in revenue for the first quarter, and provided guidance of $32.5 billion in revenue for the second quarter.

This $78 billion in revenue for the first half of fiscal 2012 (which will likely be higher, as Apple traditionally underestimates on guidance) represents yet another massive increase in revenue from the year-previous quarters. The Q1 2012 number is a rise of more than 73% over the prior year, and the Q2 guidance would represent a 32% increase growth. 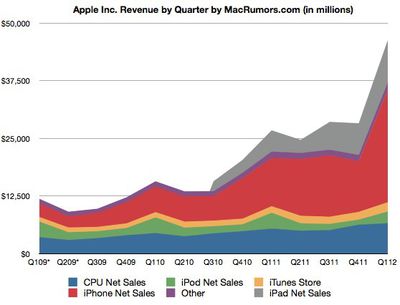 The enormous growth Apple has shown in recent years is largely on the backs of two products: the iPhone and the iPad.

The iPhone, as a product category, has grown from a mere $630 million in sales in 2007, to more than $47 billion in fiscal 2011. The iPad, for its part, tallied more than $20 billion of Apple's revenue last year. Between the two of them, Apple's main iOS devices account for more than 65% of Apple's total sales. Remove those two and Apple is a much different company.

It's all a bit of a theoretical exercise, of course. The iPhone and iPad halo effects are real, and have had a beneficial impact on other parts of Apple's businesses -- but the point remains: Apple's astounding growth is the direct result of the company's move into new product categories.

As the above chart shows, Apple's overall year-over-year revenue growth is impressive, but if the iPhone or iPad is backed out, the revenue growth is much less awe-inspiring. Without the iOS devices, Apple only showed 12% and 8% revenue, versus 56% and 69% otherwise.

To continue doubling its total revenue every two years, there are two main possibilities:

Apple would need to show extraordinary -- perhaps impossible -- growth in its iPad and iPhone divisions. Massive sales growth from the iPhone (which has grown more than 90% each of the past three years) and iPad can drive Apple's revenue growth for quite a while, but not forever.

If the iPhone were to continue its 90% annual growth for two more years (which would count 5 consecutive years of near 90% annual sales increases), in 2013 Apple would have nearly $170 billion in revenue coming just from the iPhone. The iPad, which grew an astounding 330% from 2010 to 2011, would report $78 billion in sales that same year -- $248 billion between the two.

Impressive (hypothetical) growth, and given Apple's astounding first quarter numbers, perhaps doable. But follow those numbers out to 2015 and the numbers begin to grow to improbable sizes.

The more likely prospect is for Apple to launch into yet another product category, in addition to the growth of its existing businesses. The possibilities are endless, but there is one new product that seems to be getting more attention than the others.

One thing is for sure: whatever is coming out of Apple's Cupertino R&D labs next is key to the company's continued explosive growth.

jackc
I don't think you need the golden theorem to explain the point, the writer got a little overzealous
Score: 19 Votes (Like | Disagree)

nagromme
Hopefully they’ll focus first on having a passion for making great things--things that meet a need really well--rather than following the dictates of a mathematical model! The latter may be necessary to sustain maximum growth, but it’s not sufficient—and could even harm the philosophy that has caused all of Apple’s growth to date!

“The charts say we need to be in some new areas... what product lines can we add?” sounds like an approach worthy of many of Apple’s failed competitors...

Of course, as a user and not a stock owner, I don’t care whether Apple’s bottom line grows on the same curve forever. I just want them to keep making good stuff that’s so simple it seems obvious, yet can’t be duplicated!
Score: 18 Votes (Like | Disagree)

snowmoon
APPL doomers have been around for years, maybe some year they will be right, but it's not going to be in 2012.
Score: 15 Votes (Like | Disagree)

DeltaRage
"Also known as the golden theorem, with a proof attributed to the 17th-century Swiss mathematician Jacob Bernoulli, the law states that a variable will revert to a mean over a large sample of results. In the case of the largest companies, it suggests that high earnings growth and a rapid rise in share price will slow as those companies grow ever larger."

Apple is so big, it's running up against the law of large numbers.

Also known as the golden theorem, with a proof attributed to the 17th-century Swiss mathematician Jacob Bernoulli, the law states that a variable will revert to a mean over a large sample of results. In the case of the largest companies, it suggests that high earnings growth and a rapid rise in share price will slow as those companies grow ever larger.


That's not what the law of large numbers suggests. Kind of sad that the New York Times is so badly misusing that term.

I don't think you need the golden theorem to explain the point, the writer got a little overzealous

This just in: "Apple needs to spend its cash reserves if it's to beat the Heisenberg Uncertainty Principal."
Score: 12 Votes (Like | Disagree)
Read All Comments