Monday February 6, 2012 1:15 pm PST by Eric Slivka
Patently Apple reports that Apple last week filed a curious new trademark application for the term "macroscalar". The company has typically quietly registered trademarks in countries such as Trinidad & Tobago, only to later apply for the marks in the United States and other major markets once the new products and features have been announced. While an application for "macroscalar" was indeed filed in Trinidad & Tobago last August, the new U.S. application and a similar one in Hong Kong are sparking speculation that Apple may have jumped the gun in announcing some new processor technology.

Apple's "Macroscalar" isn't just a new marketing line; it's a processor architecture that's been in the works at Apple since 2004. In fact, Apple owns at least four granted patents on the technology that has yet to come to light. We first covered it in 2009 and briefly twice last year. 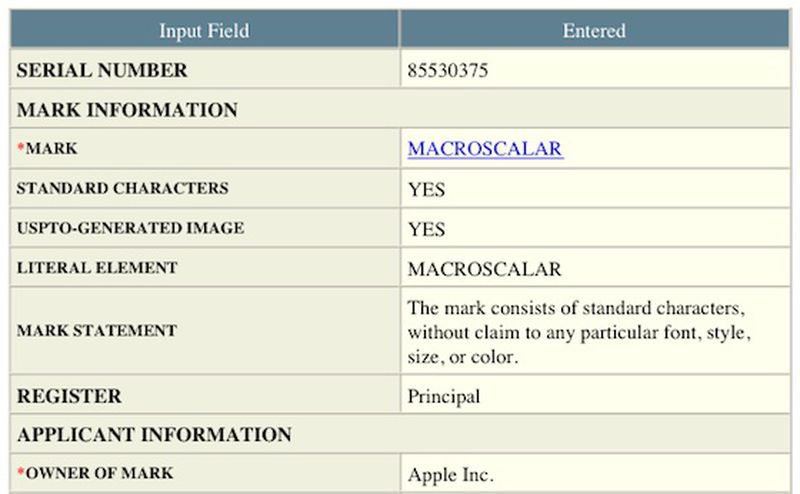 ZDNet published more on Apple's macroscalar architecture last July following one of those patent disclosures, including an explanation of how the technique could be used to improve processor efficiencies by optimizing data-dependent loops.

The macroscalar processor addresses this problem in a new way: at compile-time it generates contingent secondary instructions so when a data-dependent loop completes the next set of instructions are ready to execute. In effect, it loads another pipeline for, say, completing a loop, so the pipeline remains full whether the loop continues or completes. It can also load a set of sequential instructions that run within or between loops, speeding execution as well.

From a user perspective, the technology could support faster performance and lower power consumption, something Apple would definitely be interested in pursing for its mobile devices.

Since Apple provides its own compilers as well as designing CPUs, it is uniquely positioned to offer a complete macroscalar solution to its large band of iOS developers, further widening the price/performance gap between it and the iPad wannabes.

Is it a breakthrough? It could be if the efficiencies it promises can be realized in practice. We’ll have to see just how good Apple’s compiler engineers are.

While no specifics on Apple's plans have been revealed, the public application for a trademark on the "macroscalar" term is a curious development for the company given that most of its trademarks relate to product and feature names and other promotional descriptions. As a result, speculation suggests that Apple could be preparing to make a significant announcement that will prominently feature the "Macroscalar" term in a similar way to how the company uses "Retina" to describe its high-resolution iPhone and iPod touch displays.

Sounds like a prelude to some very, very big things - another shift. This is pretty exciting.

How excited do you get when something of substance is the thread topic?

This excited over an adjective?
Rating: 9 Votes

ANOTHER processor change? If I have to go through this all over again a forth time I will stop programming and become a barista! :confused:


If you, as a programmer, still give two craps what chip your code is running on -- well, you suck. That would also explain why barista is an acceptable move, salary wise.

Dookieman
Can someone with a better understanding on the topic break this down into laymans terms?
Rating: 8 Votes

pavelbure
for some reason it took me 2 min. to read that headline.:)
Rating: 8 Votes

It makes sense that Apple will eventually move away from Intel chipsets to their own. The benefits are in abundance;

- Apple nets more profit with each sale, since they won't have to hand Intel various licensing fees. Everyone in the pro community knows just how much the workstation class CPU's have gone up in price, and that has only inflated the Mac Pro's now ridiculous value. It only seems like 3-years ago that the Mac Pro was around £500 cheaper.

- They can control the release schedules and progress of their own technologies, rather than waiting on Intel to release their products.

- Their chipsets will work independently, and they won't have to compromise performance/features as has occurred between the Intel and Nvidia with their own disputes.

- It adds more control to Apple's products, and they market the chips to their hearts content with fancy names.

- Lastly of course, it means they can introduce new technologies now found in Intel chips or those from other rivals.

It all sounds good, but I can't imagine it'll happen for a while.


That doesn't sound good, nor is that likely to be what this is. The biggest problem from switching away from Intel would be the MASSIVE incompatibility problem that would occur.
Rating: 7 Votes

ooh a good bit of news... for mac pro users


Mac Pros will stay i86 for a very long time and I really doubt that Intel would have licensed the IP to Apple to build an enhanced i86 processor.

I'm strongly leaning towards this being either ARM enhancement or is being rolled into a custom GPU. Either approach could offer Apple a significant performance advantage.

It is actually very interesting to read some of Apple CPU patents that have been filed over the years. In some cases it looks like they are trying to design or enhance a processor for the execution of Objective C code. I'm just wondering if this tech will debut in the A6 processor.
Rating: 6 Votes

ANOTHER processor change? If I have to go through this all over again a forth time I will stop programming and become a barista! :confused:

This sounds more like compile-time optimization. Unless they introduce some new API's to help with loop optimization, odds are you won't even notice, as it will be implemented as the compiler translates into some shiny new operands in the object code, not in the Objective C itself.

I studied micro architecture in college and did some work with instruction-level parallelism; I find this very interesting indeed.
Rating: 5 Votes

Schizoid
Are you sure they don't mean, "Mac Pro Scalar" ?

This doesn't sound like a new idea at all, nor does it sound very important since modern chips do branch prediction to keep the pipelines full and do it well.

Consider, for example, the trace cache, which does the same thing but based on dynamic execution of the program, and so requires no compiler support.


You're actually confusing a couple of things here. First of all, the end of a loop is typically not predicted by branch prediction (or even a branch target buffer), but by a special hardware loop counter. (Although I've never seen a loop counter implemented in conjunction with a trace cache, and I don't think x86 supports loop counters.) Secondly, the one situation not handled by any of the methods you've mentioned is the end of a loop, which is precisely what this patent deals with. Neither branch predictors, branch target buffers nor trace caches do well with the loop ending - they all end up with an empty pipeline to fill, because they all (rightfully) predict the loop will continue. Granted, you could craft a loop to work with a very specific branch predictor, but that's going beyond the boundaries of safely targeted code.

The flipside of this statement is there's a REASON everyone focuses on getting the loop part right - almost all an application's execution time is inside the loop, and it only exits once, so there's not a lot of motive to try to solve that problem.

Regarding the other posts, I seriously doubt this would be relevant to any other architecture than ARM, and it's probably mostly a microarchitectural enhancement, meaning the ISA wouldn't change, or would change ever so slightly in a way that wouldn't break correctness.

But I just wanted to add - it sounds like their design is much larger scope than the way we're describing it - and it would have to be to justify such a name. Sound more like a form of software pipelining in hardware, where you trace through the dependent code chains across loop bodies as fast as possible while letting the independent parts complete in parallel. This could cause a major paradigm shift for high level parallelism because no longer would a loop body have to be truly parallel to be parallelized. Just about any loop could take advantage of multiple cores.
Rating: 4 Votes