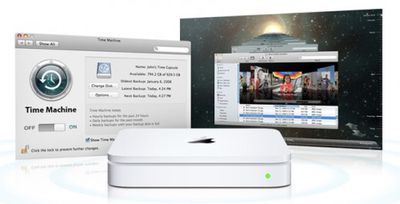 AppleInsider claims that Apple is planning on incorporating support for the new faster 802.11ac Wi-Fi specification into products this year.

The new 802.11ac standard achieves much faster wireless networking speeds than the existing 802.11n specification (in use on the latest Mac, AirPort and iOS devices) by using 2 to 4 times the frequency bandwidth (from 80 to 160MHz), more efficient data transfers through sophisticated modulation, and more antennas (up to 8; existing standards support up to 4, while Apple's Macs currently use up to 3).

This "Gigabit WiFi" offers speeds 3 times as fast as existing 802.11n wireless networks can with speeds of over 1 Gigabit per second.

Despite the specification not being finalized, Broadcom has already announced a family of chips supporting 802.11ac Wi-Fi. The final specification is expected to be certified in the second half of this year.

Apple and other manufacturers have been known to deploy un-finalized wireless technology in the past. Apple deployed 802.11n in new AirPort base stations years before the official standard certification.

macduke
Will this standard support the bandwidth capable of wireless video mirroring of a hypothetical retina iPad 3 using a hypothetical Apple TV 3?

I know people like my grandma will ask is n newer than ac?

And another thingI wish USB updated this often. Make everything backwards compatible like it is now but just update the speed every few years instead of waiting. Then most computers today would have at least a fairly speedy USB port compared to 2.0.
Score: 15 Votes (Like | Disagree)

Jayse
Bring it on Apple! This will definitely lead to better airplay streaming of movies, and hopefully Mac -> ATV 1080p streaming!
Score: 9 Votes (Like | Disagree)

Waiting for 10Gbs ethernet myself.

1Gbs ethernet is getting a little slow for moving media over a LAN.


It's effectively 90MB/sec with overhead. That's slow for you?

Unless you're using GbE for pro use, then that's another issue. Fiber is good for that kind of stuff.
Score: 9 Votes (Like | Disagree)

Why would that have anything to do with computer/device local networking ?


Because I want my wireless local network to be available on my entire property... 20 acres.
Score: 6 Votes (Like | Disagree)

How will this work in congested wifi signal areas?

It is bad enough maintaining a clean signal when my neighbours use 40MHz, let alone 80 to 160MHz


In actual fact. the 5GHZ band takes you AWAY from congestion. The 2.4 band is where the interference is at present. My TC operating at 5GHZ and 2.4 (it auto switches) gives a far better connection on my IOS devices than the older standard ever could.
Score: 6 Votes (Like | Disagree)

I hope that the speed can be promoted up to 10 Gb/s very soon. Then, a computer display, such as an Apple Thunderbolt Display with WIFI capability, can be connected to a desktop computer, such as a Mac Pro or a Mac mini, through WIFI, which will be the beginning of a new computing era.

WiDi does just this, it's Intel's implementation of the WirelessHD protocol (60 Ghz or if you will, IEEE what 802.11ad will define under the umbrella of WiGig, a competitor of WirelessHD).

On-topic : It will be nice to get a bump up from 802.11n, but frankly wireless is abysmal regardless and reaching the theoritcal top speeds is never easy, even standing next to the base stations. I do get a giggle in these threads when the uninitiated though think we can't really do stuff like stream "1080p full HD" without these advances. 1080p streams just fun already over 802.11n, it's not a matter of pixels but of compression and bitrates.

The 802.11 standards set implements wireless technologies in a set of frequencies. Each of the letters you see after '802.11' count up alphabetically from the first incarnation of the standard. 'a' and 'b' you're familiar with, 'c' to 'f' and 'h' to 'k' cover other standards that the 802.11 group have created to work with wireless LANs.

Notice how 802.11ac isn't due for ratification until December 2012. So if Apple offers it before that, we'll be getting a "draft" implementation like we did with the original 802.11n.
Score: 5 Votes (Like | Disagree)
Read All Comments