A Closer Look at iBooks Author, Textbooks and Exclusivity

Earlier today we published a story about iBook Author's exclusivity clause which generated some confusion. To clarify, Apple is not claiming exclusive sales rights to the content of published textbooks but to the specific output format (iBooks) generated by their iBooks Author tool.

Today, Apple released an easy to use tool called iBooks Author which allows anyone (publishers and users) to create interactive iBooks with text, video, images and more. As Apple mentioned during their media event, the availability of such a robust tool to make electronic books has been lacking. iBook Author can export projects in a number of different formats, including iBook format, PDF and text. 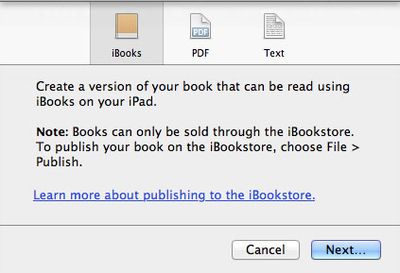 The iBooks (version 2) format is an improved format created by Apple based on ePub 3, but with additions and changes specific to Apple. These additions are believed to add new functionality and interactivity to the format as shown during today's media event.

At present, this iBook format will only work with Apple's iOS devices, and will not work on other devices. Even so, Apple has restricted sales of any iBook formatted documents coming from iBooks Author to the App Store. VenomousPorridge comes out against these terms suggesting that trying to control the output format is overreaching and falls apart in certain cases:

Or how about this: for a moment I’ll stipulate that Apple’s EULA is valid and I’ve agreed to it implicitly by using the software. Now suppose I create an iBook and give it to someone else who has never downloaded iBooks Author and is not party to the EULA, and that person sells it on their own website. What happens now?

As John Gruber points out, beyond the 30% App Store cut, Apple may simply not want to feed content to competing bookstores such as Amazon or Google.

Second, it’s about not wanting iBooks Author to serve as an authoring tool for competing bookstores like Amazon’s or Google’s. The output of iBooks Author is, as far as I can tell, HTML5 — pretty much ePub 3 with whatever nonstandard liberties Apple saw fit to take in order to achieve the results they wanted.

As we've mentioned, as a new format, the iBook format isn't even compatible with any other devices, but it's easy to imagine that compatibility could be implemented by Google or Amazon if the format takes off. Apple achieved a similar lock-in advantage with their own App Store apps, though those apps can't run on competitors' devices due to technical issue rather than licensing ones.

As for the likelihood of publisher adoption, AllThingsD points out why publishers are willing to start selling textbooks at the $15 price point when their paper counterparts go for much higher. According to the McGraw-Hill CEO, the company expects to make up the sales on volume. At least in the high school market, McGraw-Hill tends to sell $75 texts to schools which keeps those books for an average of 5 years. At $15 and sold directly to students, the company anticipates recurring annual revenue from each year's students.

Not everyone seems convinced, however, and Apple's proprietary format is raised as a possible issue. Macworld spoke with an executive at Houghton Mifflin Harcourt who claims that they need to be device-agnostic in order to support a broad number of devices.

i.mac
Humm... Yesterday there was no revolution on textbook authoring and format. Today apple comes up with both, an easy way to author meaningful textbooks, and a new class of interactive textbooks that are simply amazing.

Then, folks come screaming saying this is not good, limits my freedom somehow, not fair with amazon or google, apple sucks for yet again reinventing an industry... blah la, la blah...

Why didn't google or amazon reinvent the textbook industry before now? They certainly had an opportunity...

Why didn't sam.iclone.apple.sung or sonny invent this on their universe?

Yes, thinking forward and innovation are indeed difficult to achieve, but critizing the heck of what is for all practical purposes a revolution for textbooks creation and consumption, is somehow a hobby for many.

Somehow what apple has done today limits folk's freedom. As if choosing to continue to use printed textbooks has been forbidden, even though yesterday that was the only choice for the same folks that are complaining today.
Score: 11 Votes (Like | Disagree)

mdriftmeyer
Since when is it Apple's responsibility to support mobi or other non-ePub formats?
Score: 11 Votes (Like | Disagree)

Right. Why live with the burdens of freedom and choice when one company can do all the thinking for you...


God you are one of the most whinny people on this forum. Your handle really suits you. I have music, videos, and books on my iPad right now and none of it was bought from Apple. So how are they hindering my freedom of choice.
Score: 8 Votes (Like | Disagree)

theLimit
I don't see how there's any problem created by this. You just use your normal word processor to write your book, then use this software to publish it to Apple's store, the same as you'd use KindleGen to publish to Amazon's store. That way each book is properly formatted and fully compatible for each device supported by the separate stores.
Score: 8 Votes (Like | Disagree)

I don't see the exclusivity as a problem. The format is not standard, so it protects them against cheap iPad knock offs trying to steal content created using tools provided for free by Apple.


While it's not a standard, the format seems to be ePub + HTML5 mixture, so it would be easy enough to reverse engineer.

In fact if you just rename (http://www.tuaw.com/2012/01/19/ibooks-author-under-the-hood/) the file, it will load in an ePub reader, though you lose some of the details.

I would love to see a single, device-agnostic format to emerge instead of more lock-in.


You can always use Kindle and submit to them? Apple are obviously going to support their own platform out of the gates, and that makes complete sense. The same reason Amazon only support Kindle for books, Windows only make Internet Explorer for PC, etc, etc. It's how it works.

iPad is not just a device, it is a platform; and that is where it comes in. It is also a platform that schools are acceptive of, as it has been showcased as an education device. iPod Touches have the word iPod in the title, and iPhones are phones; schoole don't like iPods or Phones.
Score: 7 Votes (Like | Disagree)
Read All Comments