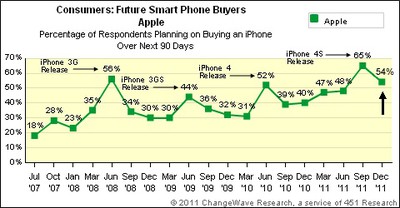 Citing "explosive momentum" for both Apple and Samsung, ChangeWave Research today released the results of a new survey of North American smartphone customers showing that over half of those looking to purchase a smartphone over the next 90 days are planning on buying an iPhone 4S. The 54% share of future buying plans held by Apple as of December was down from 65% in September, but easily marked Apple's best performance when measured two months after a new product release after demand has generally slackened considerably.

Among respondents planning to buy a new smart phone in the next 90 days, better than one-in-two (54%; down 11-pts) say they'll get an iPhone.

Apple has never dominated smart phone planned buying to this extent more than two months after a major new release.

Samsung has continued its momentum among Android smartphone purchasers, with its share more than doubling to 13% among those looking to purchase a new phone over the next three months.

In analyzing satisfaction of existing smartphone users, Apple continues to lead with 75% of owners saying they are "very satisfied" with their iPhones. The iPhone has ranked in the 70-80% range for nearly the entire history of the device. Among Apple's competitors, Android manufacturers Samsung, HTC, and Motorola all score in the 45-47% satisfaction range while Research in Motion has continued its slide with a new low of 22% of users registering as very satisfied with their BlackBerry devices.

ChangeWave's sample base focuses on professionals and early-adopter consumers, somewhat skewing its data toward higher-end users likely to have greater awareness of the market. But the firm's long history of consistent data gathering offers a look at patterns measured from this pool of users that frequently serves to set trends for the rest of the market.

No one can touch Apples great marketing machine.


Yes, great products combined with great marketing and customer satisfaction is definitely a recipe for success.
Score: 8 Votes (Like | Disagree)

Apple has consistently innovated in the absence of competition. Hell, Apple is the one *creating* the viable competition in dead, stagnant or wide open markets in the first place.

Yeah I hope all the samsung loses all their % and the rest of the companies too. Apple should have 100% market share and no competition.


That means we'll be paying $3000 for a ****** black and white phone cause Apple doesn't have to do anything because there is no competition. That would be great for everyone

Apple has consistently innovated in the absence of competition. Hell, Apple is the one *creating* the viable competition in dead, stagnant or wide open markets in the first place.
Score: 5 Votes (Like | Disagree)

True. For most of last year before the 4S arrived, there were reports that the inexpensive 3GS accounted for up to half of iPhone sales.

As for customer loyalty, Verizon recently noted something similar to what AT&T has said before: 80% of new iPhone sales are to previous owners.

So basically the carriers have built up a core iPhone user group that they can depend on to keep buying for themselves and their family.

At the same time, Android phones are selling about twice as fast as iOS phones, so intuitively it seems that new customers are going that way.


Yeah, but Android will eventually peak. It's not like Android is going to have 90% of the market, this time next year. At some point, carriers will have built up a core Android user group as well and Android growth will level off.
Score: 3 Votes (Like | Disagree)


Apple still sells 2 other iPhone models which sell pretty well. So I think it's fair to say that all 54% aren't looking at the 4S.
Score: 3 Votes (Like | Disagree)

...
As for customer loyalty, Verizon recently noted something similar to what AT&T has said before: 80% of new iPhone sales are to previous owners.
..

Really? You'd think that most iPhone 4 customers are still locked into plans (assuming that many are on plans)... And so the upgrades are from 3G/3GS customers rolling off of their plans. Looking at the historical numbers, the 3G/3GS number from 2009 aren't that high (compared to the iPhone 4 numbers). Interesting.

Wednesday June 9, 2021 8:23 am PDT by Joe Rossignol
While there are many great new features in macOS Monterey, several of them are not available on Intel-based Macs, according to Apple. On the macOS Monterey features page, fine print indicates that the following features require a Mac with the M1 chip, including any MacBook Air, 13-inch MacBook Pro, Mac mini, and iMac model released since November 2020:Portrait Mode blurred backgrounds in...
Read Full Article • 839 comments

Friday June 11, 2021 1:13 pm PDT by Joe Rossignol
On his newly launched Front Page Tech website, leaker Jon Prosser has shared renders showing off the alleged design of the next-generation iPad mini, which he says are based on schematics, CAD files, and real images of the device. In line with details shared earlier this month by Bloomberg's Mark Gurman and Debby Wu, Prosser claims that the new iPad mini will feature slimmer bezels around...
Read Full Article • 152 comments