Digitimes once again revives talk of a 7.85-Inch iPad. According to the site, Apple is likely to launch a 7.85-inch iPad prior to 4th quarter of 2012 in addition to a new iPad at the end of the 1st quarter. Apple reportedly is looking to take on the increasing number of competitors such as Android's 7-inch Kindle Fire:

However, in order to cope with increasing market competition including the 7-inch Kindle Fire from Amazon and the launch of large-size smartphones from handset vendors, Apple has been persuaded into the development of 7.85-inch iPads, the sources indicated.

There's been enough talk of such a device that it seems certain that Apple has at least been prototyping one over the past year. This previous mockup of such a device was discussed a year ago as a possibility: 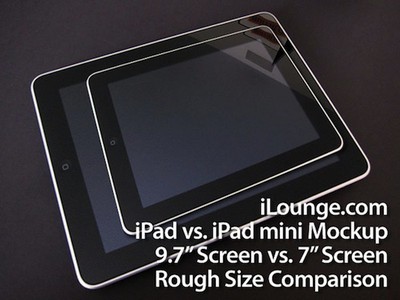 Previous mockup of a 7-inch "iPad mini"
Previous rumors have suggested that a 7.85-inch iPad would carry the same resolution (1024x768) as the current iPad. This would open the door to Apple differentiating their new iPad with a much higher resolution Retina display, while offering the old resolution on a physically smaller device.

Given the number of ongoing rumors, it seems certain that Apple has been experimenting with a 7.85-inch iPad. We'd guess its ultimate arrival will depend on how the market responds to the Kindle Fire and similar tablets in the coming year.

dethmaShine
Another analyst. Another fart. Another stupid prediction.

But hey, it's Digitimes again. :rolleyes:
Score: 19 Votes (Like | Disagree)

However, in order to cope with increasing market competition including the 7-inch Kindle Fire from Amazon and the launch of large-size smartphones from handset vendors, Apple has been persuaded into the development of 7.85-inch iPads, the sources indicated.


Since when is Apple a trend follower?
Score: 16 Votes (Like | Disagree)

b166er
I think it's been pretty well established that the fire is not "competition" to the iPad at this point.

I don't see it happening for all the same reasons the that iPhone screen size has yet to change.
Score: 15 Votes (Like | Disagree)

I'm not sure if this is a joke, but what you just listed is hardware and has nothing to do with the OS of the phone. Hardware is always evolving and most of it is not researched/made by the phone manufacturers themselves.

Phones running Android have been having the lead on that kind of things mainly because a new phone is released around every week, because they have different price segments (lower and higher end phones) and because they have to make hardware features selling points given the amount of competing manufacturers offering phones with the same software.

Anybody could predict that quad-core and 5G phones are coming someday. You're not a genius for putting them on the market slightly before the others. They're just numbers and don't change the concept of a phone.
Score: 7 Votes (Like | Disagree)

Apple following Android trends? These apple drones will have a field day.

gjd1859
iPad 3 will be launched for what iPad 2 retails for right now (about $499) and iPad 2 will go on sale after launch for about $299 to compete with the prices of Amazon Kindle Fire and Nook.