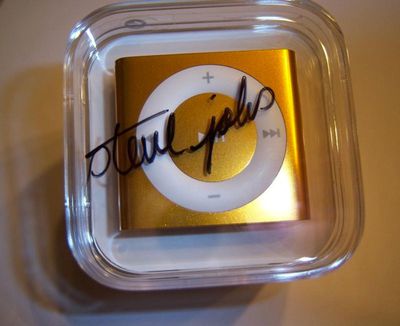 A 4th generation iPod Shuffle, apparently signed by Steve Jobs himself, is for sale on eBay. The signature on the iPod is similar to Jobs's signature, but the item doesn't include any guarantee or certificate of authenticity, though the seller does offer this story for how the signature was obtained:

As part of a "innovators of tomorrow" program, myself and a 3 of my colleagues were invited to attend an in-house Apple event. Before hand, we received complimentary Apple products, including an iPod Shuffle and iTunes credits. As usual, the topics covered touched base on were a number of Apple's latest innovations, as well as a sneak peak to future plans. After the conference, we were given the opportunity to talk with Steve himself about the shift in technology to more companion-oriented devices. As the discussion wrapped up, one person in our group asked if Steve would mind signing our iPods.

As the conversation went: "I hear you're not really one to give autographs, but I just gotta ask....will you sign my iPod? It's fine if you don't want to. I'm not normally one to even ask for autographs". Steve: *chuckling* "it's quite alright. You heard that about me?? well I wouldn't say that I don't like giving autographs, I guess I was never comfortable with the idea solely taking credit for something, which is to me what an autograph might imply. To be honest, I think I'm the last person who should sign something. A writer signing a book I can understand, but I think if anybody within our company should sign something, it should be members from our R&D team and all the others responsible for product innovation. It's unfortunate that they all can't receive the same level recognition. But I suppose it's easier this way though??....you would need a pretty big iPod to fit all those signatures".

He was very candid and very down to earth. To my knowledge, we were the only ones lucky enough to get Steve's ever-so-rare signature.

Update: The listing has been removed from eBay for unknown reasons.

Update 2: The listing has reappeared on eBay with a minimum bid of $19,995. The auction has yet to receive any bids.

griz
Steve would have never replied like that. He merely would have said, "Yep."

I've got an old paycheck signed by Steve Jobs . . . how much do you think I'll get for it?


How long ago did you work for Apple that he would be signing the checks himself? I'd bet it's worth a lot more than it was initially written out for.
Score: 10 Votes (Like | Disagree)

Dr Kevorkian94
ok guys how bout pull our money together and raise like a million dollars, then we can each have it a week. :D
Score: 9 Votes (Like | Disagree)

Digital Skunk
I've got an old paycheck signed by Steve Jobs . . . how much do you think I'll get for it?
Score: 9 Votes (Like | Disagree)

I can totally attest to Steve not liking to do autographs. Back a long time ago when I was in high school, I attempted to create the world's largest autograph collection (I lost interest as soon as I got into college), and one of the folks I requested an autograph from was Steve Jobs.

I got a nastygram (http://www.mrbrown.net/signatures/jobs/index.htm) back from one of his secretaries.


Could you please explain why you call this a Nastygram. If a famous person wishes not to provide their autograph, that is their prerogative. The letter you received seems quite nice and reasonable and bears no hint of being nasty. Indeed, I think it was nice of Apple to assign someone to respond to such requests.
Score: 7 Votes (Like | Disagree)

Mr. M
Hello. I thought I would join up and try dispel any rumors about this item, as I was the individual who listed it (yes, it's me... Hi!). There were several ideas as to why listing was ended and things basically froze. Some said because I received outside offers (which isn't entirely untrue, but that is not the reason), others said it was all a hoax, and heck, I even heard there were people claiming to be me and giving "their" side of the story. To keep it brief, individual(s) were able to obtain my information and the whereabouts of the item, and understanding that it was quite valuable, attempted to sabotage and "steal it" so to speak. We didn't want bidders, the auction or the item to become in jeopardy, so we froze things and action was taken. Ebay and the local authorities were contacted. The matter is under investigation, but at the recommendation of Ebay, the item was moved to a safety deposit box in an undisclosed location, which makes sense. This auction required constant babysitting. I received an average of 40-50+ msgs a day; some where legitimate questions and shipping quote requests, others mere praise for how cool the item was, and a few were people telling me to basically eat ***** and die for thinking this thing was worth any kind of money...but that's besides the point, they are entitled to their opinion. Because it is now nearing the holidays and vacation time, and understanding that this auction will need constant attention as it is now somewhat "high profile", I have opted to take time off to be with my family and de-stress. After some time off, the auction will resume in the new year (sometime in January).

As cheezy as this sounds, I was most concerned about the bidders being left in the dark about the item. I want them to know that it's still around, it is safe, and that I am committed to carrying out a secure auction. I will be discrete about who shows interest, and I will not reveal where the item ends up if purchased. I hope bidders will have the same level of confidence in me when it is relisted. I want to apologize to the bidders, I do appreciate ever bidder that showed interest, regardless of what their bid level was. I don't take the auction lightly.... as the bids have told me, this was serious.

To be candid, I literally had no idea this thing would bring so much attention and do as well as it was doing. I would have been happy to get my $995 starting bid....so needless to say, when I heard that it had passed $25k, and was nearing the $30k mark with no signs of slowing down, I almost threw up lol. Up until now, the few lists I've had have been comparatively... well ....tiny, but I was still proud of ever one of them and made sure that every transaction was a pleasant one. Thanks for listening. :)

Wow, thought I was the only one with a signed iPod. Although I can top that dude's story... mine was signed IN STEVE's BACKYARD! ;)

Read about it here:

or here (near the bottom):