MTA on State Investigation of Apple Grand Central Terminal Deal: 'Bring It On'

Just as Apple revealed yesterday that it will open its new Grand Central Terminal retail store on December 9th, New York State Comptroller Thomas DiNapoli announced that he would be investigating the terms of the deal, which appeared at first glance to be extremely favorable for Apple compared to leases held by other terminal retail tenants and broader market rates. 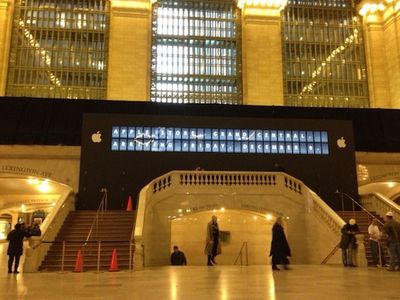 The Metropolitan Transportation Authority (MTA), which oversees Grand Central Terminal and the leasing of its retail space, has now issued a statement welcoming the investigation and expressing confidence that it received the best possible deal for a difficult space that had previously been underperforming expectations.

With regard to any calls for an investigation into the lease, our comment is this: “Bring it on. This is the best possible deal for the MTA, quadrupling the rent we receive and bringing foot traffic to Grand Central Terminal that will increase revenue from all of our retailers. We look forward to explaining the details of this competitively bid transaction to anyone who is interested.”

Some of the details of the MTA's argument were covered in yesterday's report, but the agency makes clear that Apple's lease is a significant upgrade over the previous tenancy from restaurant Metrazur, which paid only $263,000 per year in rent and did not earn enough revenue to require percentage rent above that amount. Apple's lease quadruples that of Metrazur's rent obligations to $1.1 million per year.

The MTA also notes that the space is a difficult one for retailers to deal with given the limitations imposed by historic preservation regulations for the open balcony space. Apple's tenancy also required a $5 million buyout of Metrazur's lease, which ran through 2019, and more than $2.5 million in improvements to the building infrastructure, including a new elevator, HVAC systems and other changes.

This is the best possible deal for the MTA. When all of the costs are included, Apple is paying more than $180 per square foot over the ten-year lease. As the competitive bidding process revealed, there are no other uses for this space that would generate the same revenue for the MTA given the up-front costs and limitations.

The MTA is clearly viewing Apple's tenancy as a high-profile addition to draw more customers to the retail component of the terminal in general, noting that for every 1% increase in sales across the terminal's retailers, the MTA will gain $500,000 in rent due to the percentage rent provisions in place on the leases of nearly every other tenant with the exception of Apple.

Other Grand Central Terminal retailers are reportedly "very pleased" that Apple will be adding its hefty retail presence to the area and are looking forward to the increased foot traffic expected from the addition.

btbeme
So... Apple is happy. MTA is happy. The other retailers are happy. The building space is being used properly and with dignity. Nobody else came forward with a better plan. Improvements are being made at Apple's expense. Sales tax revenue will be huge. Traffic is expected to increase profits for all involved...

With all that extra revenue, tolls for bridges and tunnels will be less and their will be better train service right?


Do you realize what the MTA's budget is? Any money from this deal is more or less a rounding error for the MTA.

Also keep in mind that the ridership on the Lexington Avenue line alone (4, 5, 6) is higher than the ENTIRE ridership of the CTA (Chicago Transit Authority). The amount of people the MTA moves everyday is far greater than any other transit authority in America.

For those not from the NYC area, the MTA is the most corrupt and mismanaged entity in the city. Fares and tolls keep going up and service continues to go down.


This is in large part due to the $30B or so of outstanding debt the MTA has, in large part due to Governor Pataki and Mayor Bloomberg cutting transit subsidies. Pataki essentially told the MTA to put the capital program on a credit card (bonds) and now about 20% of the MTA budget alone goes to paying down old debt. How can anyone manage an organization when 20% of their budget is tied down like that?

Top level executive pay keeps going up as does the amount of money put into pensions of the lazy employees.


Top level executive pay doesn't keep going up. MTA Headquarters (non-union) employees have had their pay frozen and many jobs have been slashed. If you think $300K a year is excessive for somebody running the largest public transportation system in America, then you're ignorant.

Oh hey, 18% of the budget is going to bankers to pay down debt. God damn unions.

The increased pension costs can also be attributed to Wall Street's decline, thanks to wreckless bankers and lack of regulation.

Healthcare costs are going up for everyone because the healthcare system is entirely broken in this country.

This is ridiculous! Are they going to investigate every single mall and aggregate shopping locations to see if different pricing is given to certain retailers?!


You need to learn the difference between a mall and public property
Score: 8 Votes (Like | Disagree)

iRCL
So, now that the full details are disclosed, this sounds like it's in complete opposite of the original rumor article about a "sweetheart" deal, since the real deal is actually fairly normal when the numbers are crunched.
Score: 7 Votes (Like | Disagree)

levitynyc
With all that extra revenue, tolls for bridges and tunnels will be less and their will be better train service right?

For those not from the NYC area, the MTA is the most corrupt and mismanaged entity in the city. Fares and tolls keep going up and service continues to go down. Top level executive pay keeps going up as does the amount of money put into pensions of the lazy employees.

In the end, the public loses.
Score: 7 Votes (Like | Disagree)

The previous tenant had EIGHT YEARS remaining on his lease which was only $15 per square foot. Apple offered to foot the bill to buy that guy out of his lease which was extremely cheap (i.e.: save the MTA from only getting $15 per square foot on the same space for eight more years). Then Apple signed a 10 year lease (not much longer than the previous tenant, but still guaranteeing a solid tenant for ten more years). Then agreed to give MTA four times the rent ($60) per esquire foot over that eight year lease period plus two more years. Additionally, Apple is footing the bill for all the improvements being made to the space including an elevator AND Apple will drive more business to other businesses in Grand Central thus increasing the chance of revenue sharing from those businesses for MTA. If MTA had not made this deal what other "competitive bid" would have been better? Who else was going to buy out the existing tenant's eight year lease and replace it with a ten year lease at four times the rent and do their own improvements.

If Apple vacates in ten years, MTA gets to keep the capital improvements and rent at a much higher rate if they want. If Apple stays, MTA can negotiate a new rental rate.

MTA got the sweetheart deal in all this -- though if the store does well for Apple then it will be mutually beneficial. The sad thing is that MTA will likely mismanage the money and train fares will still go up.
Score: 6 Votes (Like | Disagree)
Read All Comments