Rumors have suggested that Apple has acquired 3D mapping firm C3 Technologies. While much of the early demos showed C3's ability to create realistic looking 3D maps, the company had also been working on both street view and interior views prior to their acquisition. 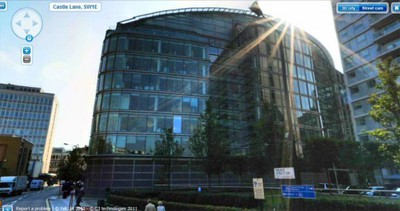 BrightSideOfTheNews reported in a January, 2011 article that the company was creating street level imagery as well using the same technology:

Beyond street level views, the company was also offering interior panoramas as shown in this early promotional photo:

As well as increasing its geographic range, C3 is expanding into interior settings. With a special camera rig, they can also create a 3D model of the interior of a building using the same photo stitching they use with their aerial or street level maps. Businesses have to request C3 to come in and create such an inside map of their facilities, so don’t expect these 3D indoor maps to become ubiquitous anytime soon. Still, the technology is ready and available, so we’re bound to see at least a few examples in the months ahead.

Obviously, both street-level work and interior shots are particularly resource intensive. In fact, the interior views are said to have required businesses to invite the company in to make create the images. It's not clear if Apple will use the technology to this degree when they release it. At a minimum, however, street view data would be required to make it match up feature for feature with Google's technology which presently powers iOS Maps.

BornAgainMac
Schmidt says it sees Apple's voice assistant Siri as a "significant development" that could threaten Google's business. I wonder what Schmidt will say about this?
Score: 7 Votes (Like | Disagree)

I sure don't want them Seeing the inside of my house :o


Don't invite them to take pictures of the inside of your house.
Score: 7 Votes (Like | Disagree)

griz
This will not match Google, it will be far superior. The maps will be seamless since they are 3D models. You will be able to run street view as if you were driving down the road. It would be perspectively correct for the lane and direction of travel and it could show custom overlays for turn by turn directions.
Apple will have the single best turn by turn imagery out there.
Score: 5 Votes (Like | Disagree)

GenesisJLS
Another great acquisition by Apple. I still remember when they acquired FingerWorks, i.e., rights to use their multi-touch technologies in their products.
Score: 5 Votes (Like | Disagree)

What company would invite someone making smartbomb targeting imagery to photograph their interior?!


they had already moved away from military uses by the time they launched this. :)

No, if they are doing that imaging and data mining they won't be like the other cars with all the cameras, antennas, etc.


I've seen cars like that in London with no logos on them. We really can't make any assumptions about this stuff. I mean, how many people have seen a Google Streetview car for certain?

The data issue is also a non-issue because nothing is stopping Apple buying in this data from Google or from multiple sources. Big data is a big deal and Google are far from the only player here.

Let's be clear on this, Apple is spending big and they're planning to launch something in this space. We don't know what and we don't know when but if it looks as good as the C3 stuff then we're in for a treat when it hits.
Score: 3 Votes (Like | Disagree)
Read All Comments

Friday July 23, 2021 2:52 am PDT by Sami Fathi
The iPhone 13 may support faster-charging speeds with a 25W power adapter, compared to the current limitation of the iPhone 12, which only supports fast charging at up to 20W, according to a rumor originating from China. The iPhone 12 supports fast charging with a 20W or higher power adapter; however, even if users use a more powerful wall adapter, the iPhone itself only supports up to 20W....
Read Full Article • 111 comments