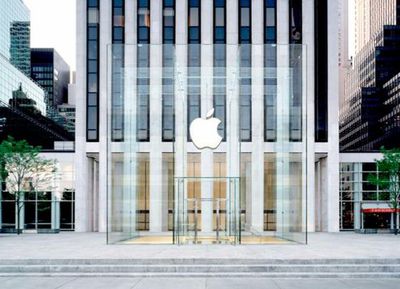 Apple began work on the $6.6 million renovation back in June. Since then, the 5th Avenue Store has been surrounded by barriers and the store has remained open as the construction has continued. The redesign involves replacing the cube's 90 glass panels with only 15 larger ones. The new design is rendered artistically above.

Steve Jobs, himself, had much input into this Apple Retail Store's design. The Wall Street Journal had previously reported that Jobs had a very hands-on role. The developer said:

“[Steve Jobs] is solely responsible for the cube,” Mr. Macklowe said. “I had different shapes and different ideas, and his cube was somewhat different than what it is now, but it’s Steve Jobs’s idea.”

Jobs has had a long fascination with the cube shape. During his time at NeXT he created the NeXTcube workstation housed in a magnesium enclosure. Apple even created a Power Mac G4 Cube in 2000, a few years after Jobs' return to Apple.

A November 4th unveiling falls in line with the original permits which estimated "early November" as a possible completion date. If the grand unveiling is indeed taking place this Friday, we expect Apple will make an announcement this week to inform the press.

nerdo
The most transparent thing Apple has done in years.
Score: 6 Votes (Like | Disagree)

That was completely worth the $6.6B it costed to get it renovated. I'm serious, it looks sick. I thought it was cool before, but damn. Can you imagine? Replacing 90 glass panels with only 15?

Can't wait to check it out in person.

Below the photo it states "Artist Rendition" :p


I wonder if Arn hired the same guy who did the 'iPhone 5' rendering. :D
Score: 2 Votes (Like | Disagree)

they should have used 5 panels, one for each side tbh.


In the bio, Steve mentions that they had to build their own autoclaves in china to make the glass. If they had used the technology available, the cube would have been a foot shorter.

they should have used 5 panels, one for each side tbh.
Score: 1 Votes (Like | Disagree)

Based on the artist rendition, I think I liked it better before. :( It looked amazing in person, the glass seams between the panels shimmered and refracted light, bending it into these amazing patterns- removing panels is going to reduce that effect.

One man's "shimmer" is another man's "gaudy." I have a feeling that at certain parts of the day the reflections got a little too prismatic and diffuse, and ruined the effect they wanted (which is basically, feeling like you're not indoors at all).

Personally, I would have suggested looking into colored/tinted glass -- perhaps a blue tint? Something like that would have looked more striking, and been amazing to light up at night too.

I disagree, because then you'd be stuck with "what color is YOUR Apple Store?" It would be way too early iMac, and would distract from the products.

This is mentioned in his book. This renovation was completely a pet project by Jobs. Apparently, Ron Johnson disagreed with the new design (and likely the additional unnecessary costs), but Jobs went ahead with it anyway.

I personally like the old cube better. Only Apple would redesign what's become a landmark.

That's totally Apple's M.O. Even though something is gorgeous and makes a splash (Cube store, iPhone, iMac), you redesign it to make it look even slicker (Cube redesign, iPhone4, iMac). Steve Jobs has for many years done things that certain advisors didn't want. Never underestimate the power of saying no. otherwise, Apple's products would have a much cheaper feel to them.
Score: 1 Votes (Like | Disagree)
Read All Comments