Siri Hacked to Run on an iPod Touch and iPhone 4 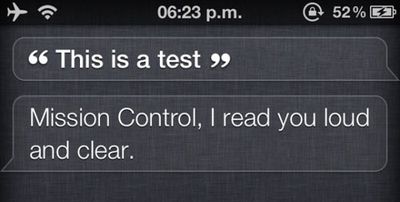 Apple's new Siri voice recognition system is only officially available to new iPhone 4S users. Predictably, over the past few weeks, there have been various attempts to port Siri to previous generation hardware. The early versions of these hacks, however, simply got the user interface working on the iPhone 4, but were unable to actually use the voice recognition due to authentication issues in connecting to Apple's servers.


The video shows just a couple of simple question/answers but seems to run at a good speed. There had been some speculation that Siri might require the A5 processor in the iPhone 4S, but based on these early findings, it seems not.

The developers have said that there will be "no public release soon" and not to ask. A public release also seems unlikely due to the legal issues in repackaging Apple's code and distributing it.

We've since spoken to @stroughtonsmith who told us that despite it working on the iPod Touch, it doesn't work entirely well due to the relatively poor performance of the microphone. "You have to be loud and close to it", he said. However, it does perform quite well on the iPhone 4 and works "just as fast as the 4S".

Siri should have been included in the 5.0 update for the iPhone 4.

But of course, Apple wants us to buy the latest and greatest.

Gather around youngins. Let me tell you a story about the days before Apple in the phone industry.

Apple: making a free app cost $199 and calling it magical


To be fair, it wasn't free to develop.

Gather around youngins. Let me tell you about the days before Apple in the phone industry.


Some android manufacturers do that still.
Score: 46 Votes (Like | Disagree)

nfl46
One less reason for people with iPhone 4's to upgrade to the iPhone 4S. I guess its true, Siri was just used to market the iPhone 4S. So typical of Apple.
Score: 44 Votes (Like | Disagree)

Maybe in a week MacRumors will post that the 4S and iPad 2 were jailbroken.

If you're suggesting this has been done before today. It hasn't. None of the previous versions did the voice recognition part.