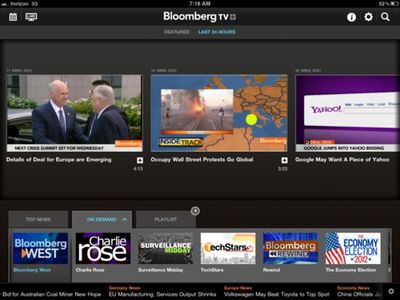 Meanwhile, satellite television provider DirecTV yesterday updated its iPad app to provide free live TV for subscribers. Like several other similar apps from cable companies such as Time Warner, DirecTV customers can only view live TV on their iPads while in their home and connected to the same Wi-Fi network as their DirecTV HD DVR.

Turn your iPad into a portable TV and watch your favorite shows in any room of your home.
- Quickly scroll through a list of channels available to watch on your iPad with a dedicated “Live TV Streaming” Module.
- Get tips in the help section to guide you through features in the app.
- Set parental controls to block live TV channels viewed on the iPad.
- Change start and end times to add padding to a program when setting a recording.

DirecTV is offering an initial batch of over three dozen channels for live streaming to the iPad, with additional channels presumably coming in the future. The DirecTV app also offers easy transitions from iPad to TV, allowing users watching a channel live on their iPad to simply swipe up on the video to have their DirecTV DVR automatically tune to the channel for viewing on their television set.

Meanwhile I got an email from Time Warner today saying that my rates are going up to "improve services" yet they still have the crappiest streaming app of all (with the most random selection of channels), no access to HBO Go or Showtime Anywhere, and some of the buggiest cable boxes in the industry (and that's saying something, I used to have Comcast).

Sorry for the rant. I wish FiOS was available in this building.


You're right on about TimeWarnerCable. They have the worst technology I've ever seen for a supposed technology company. I recently sent an email to Glenn Britt, the CEO of TWC. Among other things, I told him if I was their CTO I would probably kill myself from shame or embarassment.

I too anxiously await the availability of FIOS.
Score: 2 Votes (Like | Disagree)

Exactly. Let's see, I can watch my DirecTV on my small iPad screen...or the nice, big TV in the living room. Or the TV in the bedroom. Seriously? I was excited about a decent DirecTV app until I read this part. FAIL.

How about when you go drop off the kids at the pool? :p
Score: 2 Votes (Like | Disagree)

XvMMvX
Cable companies need just just give it up and become ISP's. Let content be delivered via steam un-inhibited and charge for BANDWIDTH not data cap.

They are keeping the strangle hold on their inflated tv packages so this wont happen. Unfortunatly they are the ones that control both the internet and tv.

I am long awaiting a day when i get my locals OTA in HD and everything else I want to watch I just purchase individually.

For instance....new episodes of Boardwalk Empire are available sundays at 8pm CT. Charge a fair price for a season of the content you want to watch.

I only want ESPN and a handful of other networks...but I have to buy the bloated overpriced package they are all in and several boxes so I can watch on multiple TVs.

This is a good step but not quiet there yet.
Score: 2 Votes (Like | Disagree)

MacMojo1
Cool but I want to be able to access content when I travel. When at home I watch tv on a big screen.
Score: 2 Votes (Like | Disagree)

iPodiPad
And just a week ao I cancelled my directv service ):
Score: 1 Votes (Like | Disagree)

At first I agreed with you, but now that I've given it some more thought...

It's not just another TV, it's much more portable. If you are outside, relaxing next to the pool or sitting by the fire pit and want to watch a movie under the stars (not under the sun for obvious reasons) with your significant other, it's probably easier to bring out your iPad than haul out your TV and cable connections.

If you want to go less romantic... Bathroom. Does it need any other explanation?

I'm not a DirectTV guy (other than my PS3 Sunday Ticket), but I'm sure cable companies will be forced to offer live content anywhere to stay competitive with media on demand.

Agreed. I am excited about this as I do in fact like being able to carry it around the house and have it in front of me.

But, I also agree that more channels need to be added and making it more travel-friendly (content wise) needs vast improvement
Score: 1 Votes (Like | Disagree)
Read All Comments