One of the new features of the iPhone 4S has been the faster HSDPA (14.4Mbps) data support for GSM networks. This theoretically allows the iPhone 4S to see much faster download speeds when on the right mobile carrier.

In the U.S., AT&T is the only network that could take advantage of the advanced capabilities of the new iPhone 4S communications chip, though there had been some debate about how much of an improvement users might see on AT&T's network. AT&T is purposefully vague about how fast their network can run, and the rollout for the faster speeds remains limited. 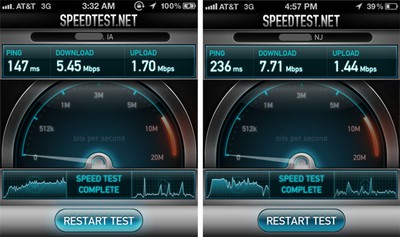 Two previous iPhone 4 users have emailed us with speed results that show significant improvements with their new iPhone 4S. The first reader located in New Jersey (image right) was able to obtain 7.71 Mbps down. He reports previous speeds on his iPhone for in the 1-2 Mbps range. Another reader in Iowa (image left) shows speeds up to 5.45 Mbps. He had only previously seen as high as 4 Mbps on his iPhone 4.

The improvements may only be seen in very specific geographic areas depending on AT&T's network support. Others have seen no significant change in their network speeds after upgrading from the 4 to 4S.

AT&T has even been calling this faster HSDPA support "4G", though there is some debate on the correctness of that term. Still, AT&T's present network is capable of much faster speeds than both Sprint's and Verizon's.

WannaGoMac
Ok, so AT&T is faster in the tests.

Then why in real world use does Verizon load web pages faster than AT&T often? Is it because AT&T is just prone to packet loss, and has a slower back end?

BTW the above is a question, not a statement...
Score: 3 Votes (Like | Disagree)

dstankus
I did the big upgrade; from a 3G to a 4S.

milan03
"Still, AT&T's present network is capable of much faster speeds than both Sprint's and Verizon's."

OP should add "only when using an iPhone 4S".
Verizon's EVDO rev. A 3G network that iPhone 4S connects to is in theory much slower than AT&T's 3G (even though AT&T calls it 4G) 3.1mbps to 14.4mpbs.
But when looking at the whole network, Verizon's 4G LTE dominates AT&T in all but 4 markets where they are even in terms of LTE spectrum deployed (San Antonio, Houston, Dallas, Atlanta) In Chicago Verizon deployed 10x10Mhz LTe vs 5X5Mhz on AT&T's which gives Verizon 73.6mbps vs 39mbps theoretical throughput advantage. In real world testing Verizon's year old LTE network performs on par or better than AT&T completely unloaded LTE network.
Verizon has over 160 markets blanketed with LTE and 5 LTE mobile smartphones vs AT&T's 5 markets and zero smartphones at the moment.
Score: 3 Votes (Like | Disagree)

I'm not getting very spectacular improvements. From 1mbps on AT&T with my 4 to 3mbps now on my 4S.


Amazing that a 200% increase in speed isn't "spectacular" to you.

I'll agree that 3 mbps is much slower than what I'm getting, but you were getting 1 just a couple of days ago!
Score: 2 Votes (Like | Disagree)

I'm not getting very spectacular improvements. From 1mbps on AT&T with my 4 to 3mbps now on my 4S.

Care to pull anymore BS out your ass?

I wish I remembered where I saw this, but there was even an article comparing graphics downloaded on sites on Verizon and AT&T, each on an iPhone 4. The Verizon side had noticeable color banding and compression artifacts in the images.
Score: 2 Votes (Like | Disagree)
Read All Comments