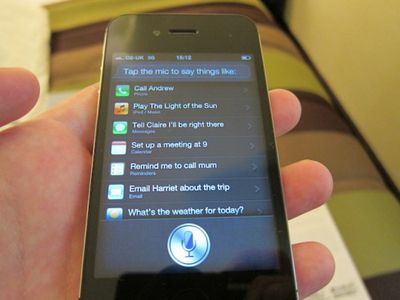 Photo courtesy of TechCrunch
The early iPhone 4S reviews are in. Apple has provided some publications with an early review unit of the iPhone 4S and here are the reviews. We've extracted some of the more interesting points from each review, but you can click each title to read the full writeup.

- "The iPhone 4S blows away the iPhone 4 when it comes to speed."
- "The true killer feature of the device is Siri."
- "The amount of times Siri hasn’t been able to understand and execute my request is astonishingly low. I’ll say something that I’m sure Siri won’t be able to understand, and it gets it."
- You need to be connected to internet for Siri to work.

- "[The iPhone 4S is] easily one of the most capable handsets on the market."
- "The 4S is more than capable of going through a full business day without needing a charge, and if you’re a lighter user, you’ll rarely have to worry about it."
- On Siri, "The software even has a good sense of humor. Asking it “what is the meaning of life?” will bring up a number of responses, both serious and not so serious. The first time I asked, Siri simply said “42.”

- "My advice is that owners of the iPhone 4 needn’t rush to upgrade; they can get the new operating system. But owners of older iPhone models, or those with basic phones, will find this latest iPhone a pleasure and a good value."
- In Washington suburbs, was able to get nearly 7 megabits per second.
- AT&T Model still dropped calls.

- "This phone comes dangerously close to displacing a $200 point-and-shoot digital camera."
- "Apple says Siri will improve with time — both because she adapts to you, and because Apple itself will periodically upgrade her brain."

- "Before, with the standard iPhone calendar, I would often forget to add an event because I was too busy to type it, and as a result I would forget I had something scheduled altogether. With Siri and Apple’s new Reminders to-do list app, it’s unlikely I’ll forget anything important again because the process is so effortless.
- "From my experience, talking on an iPhone 4S on AT&T sounds noticeably clearer than it did on past iPhones I’ve owned"
- Several amusing examples of Siri responses including 'I'm Drunk' (Here's a list of cab companies)

- An amusing exchange with Siri at the top of the review
- A 1080P sample video is included (edited with iMovie on a Mac)
- More praise for Siri: "Siri is not your typical voice recognition technology. You don’t dictate to Siri, you interact and have a conversation with Siri. It’s difficult to explain how good Siri is, but you’ll find out soon enough."

Stephen Fry's review for The Guardian

- "So good is the voice recognition that it is now built into all apps that use a keyboard. For the first time I've found that I can happily and accurately dictate texts and emails."
- "There is an option to enable Photostream, which keeps every picture you take for ever. Be warned. You cannot delete a picture once it is in Photostream. There may well be blushes within families who share devices and discover that a photo they would rather not be seen is permanently on view, but they'll have to learn the hard way."
- "Once again Apple is taking a lead and asking a lot of its competitors. I wish those competitors luck, for the better all smartphones are, the happier I am. If Steve Jobs's true legacy is that the devices every other company makes are so, so much better than they otherwise would have been, I don't think he would mind one bit."

FroMann
One week everyone complains about the 4S being junk, next week people will call it the best phone ever.
Score: 42 Votes (Like | Disagree)

slrandall
Oh, did Giz not get one? :rolleyes:
Score: 35 Votes (Like | Disagree)

macrumorsuser10
Absolutely amazing reviews. The reviewer feedback on Siri is fantastic. It's this type of overall integration (hardware, OS software, OS features like Siri, the wealth of third party applications and peripherals) that Android fanboys just don't understand. They're the ones putting tails and lights on their cars and thinking the specs make it superior to a high-end sedan. They can go f* themselves.
Score: 25 Votes (Like | Disagree)

bpeeps
Want. This week has been the slowest week ever.
Score: 24 Votes (Like | Disagree)

iGobbleoff
And only a couple of weeks ago people were complaining about the specs and threatening to go to Android
Score: 19 Votes (Like | Disagree)

Did anyone else notice that when he did the dictation bit in Notepad, on the screen it said 'Iphone Ass" and he didn't mentioned it, but after the camera cuts back to him, he kind of laughs for a second. around 4:16.