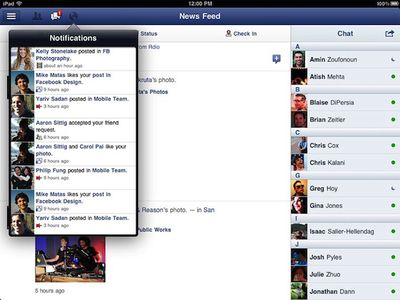 Facebook today announced the release of its first native application for the iPad, coming as an update to the company's existing iPhone application. The new iPad compatibility is being featured on Facebook's site.

- Enjoy bigger, better photos: Your photos take on new life on the iPad. They're big, high-res and easy to flip through—like a real photo album.
- Focus on what matters: With less on the screen, it's easier to zoom in on your friends' photos, updates and stories.
- Navigate anywhere, fast: Just tap, slide or pinch to get from one screen to another and back again in no time.
- Never lose your place: Use simplified navigation to send a message, see your notifications or browse your bookmarks without switching screens.
- Play games on the go: Play your favorite Facebook games wherever you are, and on a bigger screen.
- Tap to send messages: A simple dropdown menu makes it easy to scan and send messages without visiting your inbox.

The updated app should be propagating through to the App Store at any moment [App Store].

Facebook's long-awaited iPad application had apparently been delayed several times, with lead developer Jeff Verkoeyen quitting in part due to the delays. The New York Times reported back in June that a Facebook app for iPad would be released "in coming weeks". In late July, an iPad version of the existing app for iPhone was discovered inside the iPhone app, accessible through a tweak, but Facebook quickly disabled access to the iPad-specific interface through that mechanism.

Update: The universal Facebook application (version 4.0) is now available in the App Store.

Details on the improvements to the iPhone version of the app:

With improved search and browsing, the facebook.com features you use most are now just a touch away. It’s a faster, fuller Facebook for iPhone.

- Games & Apps: Play games and access your favorite apps on the go
- Navigation: Send a message or see your notifications from any screen, and swipe to browse Facebook without losing your place in News Feed
- Bookmarks: Your groups, pages and apps are all in your left-hand menu, and the ones you use most are right on top
- Search: Search for anything on Facebook—people, apps, pages and more—without having to click around or switch views
- Security: We’ve added a few updates to make the app more secure

Update 2: Some users who already had the Facebook app installed on their iPads are reporting that the app is now crashing immediately upon launch. Deleting the application from the device entirely and redownloading it appears to resolve the issue.

Any word on if the iPhone part of the app has been updated with new features?

wordoflife
Nice. It only took them forever.
Score: 22 Votes (Like | Disagree)


If you don't why did you not only open this thread but post in it?
Score: 13 Votes (Like | Disagree)


I'm sure that some of their BILLION users care.
Score: 11 Votes (Like | Disagree)

Lukkee24
They could have actually updated the app before announcing it..
Score: 9 Votes (Like | Disagree)


I don't think 100m will be updating simultaneously.

Many of my friends actually have updates always pending in the App Store and just never bother to. My OCD hates seeing that badge.
Score: 8 Votes (Like | Disagree)
Read All Comments