Isaacson Shares a Touching Preview of the Steve Jobs Biography 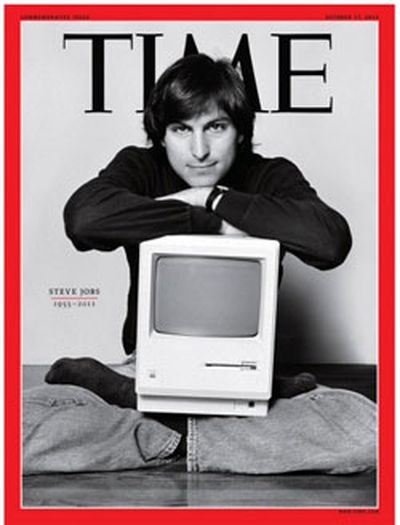 Time Magazine has cancelled its previously scheduled print run this week in order to put together a retrospective issue on Steve Jobs. In it, Walter Isaacson -- Steve Jobs' biographer -- writes a preview of what's to come, via Fortune.

In the early summer of 2004, I got a phone call from him. He had been scattershot friendly to me over the years, with occasional bursts of intensity, especially when he was launching a new product that he wanted on the cover of Time or featured on CNN, places where I'd worked. But now that I was no longer at either of those places, I hadn't heard from him much. We talked a bit about the Aspen Institute, which I had recently joined, and I invited him to speak at our summer campus in Colorado. He'd be happy to come, he said, but not to be onstage. He wanted, instead, to take a walk so we could talk.

That seemed a bit odd. I didn't yet know that taking a long walk was his preferred way to have a serious conversation. It turned out that he wanted me to write a biography of him. I had recently published one on Benjamin Franklin and was writing one about Albert Einstein, and my initial reaction was to wonder, half jokingly, whether he saw himself as the natural successor in that sequence. Because I assumed that he was still in the middle of an oscillating career that had many more ups and downs left, I demurred. Not now, I said. Maybe in a decade or two, when you retire.

But I later realized that he had called me just before he was going to be operated on for cancer for the first time. As I watched him battle that disease, with an awesome intensity combined with an astonishing emotional romanticism, I came to find him deeply compelling, and I realized how much his personality was ingrained in the products he created. His passions, demons, desires, artistry, devilry and obsession for control were integrally connected to his approach to business, so I decided to try to write his tale as a case study in creativity.

The release date of the book has been moved up twice, and is now October 24th. After Jobs resigned as CEO in August, he knew the end was near. The WSJ reports that Isaacson's last interview was roughly four weeks ago, and "Jobs indicated at that time that he knew he was going to die soon."

9to5Mac has another touching excerpt from Isaacson's Time Magazine essay, which will hit newsstands tomorrow, that reiterates the love Steve Jobs had for his family, especially his children:

A few weeks ago, I visited Jobs for the last time in his Palo Alto, Calif., home. He had moved to a downstairs bedroom because he was too weak to go up and down stairs. He was curled up in some pain, but his mind was still sharp and his humor vibrant. We talked about his childhood, and he gave me some pictures of his father and family to use in my biography. As a writer, I was used to being detached, but I was hit by a wave of sadness as I tried to say goodbye. In order to mask my emotion, I asked the one question that was still puzzling me: Why had he been so eager, during close to 50 interviews and conversations over the course of two years, to open up so much for a book when he was usually so private? “I wanted my kids to know me,” he said. “I wasn’t always there for them, and I wanted them to know why and to understand what I did.”

Steve Jobs by Walter Isaacson will be released on October 24th. It is available via preorder from Amazon/Kindle, the iBookstore, and elsewhere.

Peace
Like I said yesterday. This man is the epitomy of class.

"I wanted my kids to know me," he said. "I wasn't always there for them, and I wanted them to know why and to understand what I did."
Score: 24 Votes (Like | Disagree)

impulse462
Usually the diagnosis of pancreatic cancer is a death sentence. Steve still introduced the iPhone and iPad after this diagnosis.

I am sad that he has passed away. He was a great, inspiring visionary.

I am further saddened to read that he, in part, wanted to do the book in order for his children to get to know him, to get to know a person in a way that all of us who read this book will get to know. By this I mean that we will know him almost just as well as they know him, if what he says is true.

My wife and I had a son a several months ago and I can only hope that he will get to know me better than anyone else in this world that I do not already call family.
Score: 16 Votes (Like | Disagree)

Ryth
Myself and a co-worker thought that it would be fitting if we could somehow organize the night that Steve Jobs is laid to rest where everyone goes outside at a certain set time across the U.S. when it is dark and we put our iPhones, iPods, iPads and point them to the sky so they display a glowing and bright white Apple logo on their screens (sample attached)..or even just the trademark white glowing screen of Apple devices.

We would need obviously someone to create a simple iOS application for this that displays a illuminated/glowing Apple Logo on a black background on the screens of these iOS devices and it would be a free download so everyone could participate it so we can pull this off.

I think this would be a fitting tribute to Steve. And I think it would be stunning if we saw the imagery of this from above from the various cities.

Saladbowl
wow, that part about his kids - I get that so well... I'd do the same..
I dont think he died a sad man. He had his things in order and knew about his legacy and impact. He made himself immortal... he will be a part of the world's history that children will learn of in decades from now. I feel sad, but thats an egoistic feeling. I dont think we have to feel sad for Steve. He suqeezed more out of that one lifetime than I would fit into 4 probably... so, he had a great life, did what he loved, had a family he loved and was admired by many...
Score: 9 Votes (Like | Disagree)
Read All Comments

Sunday September 25, 2022 7:02 am PDT by Sami Fathi
Apple is gearing up to possibly replace its "Pro Max" iPhone with an all-new "Ultra" iPhone 15 model next year, reliable Bloomberg journalist Mark Gurman said today. Writing in his latest Power On newsletter, Gurman said that for the iPhone 15, Apple is planning a revamped design alongside USB-C and a potential name change. Apple could replace its "Pro Max" branding, which it started to use...
Read Full Article • 196 comments