Adobe today announced a new cloud-based initiative, with content creation for tablet devices playing an integral role in the effort. As part of that initiative, Adobe will be releasing six new tablet apps to allow users to easily and elegantly design and edit their content. 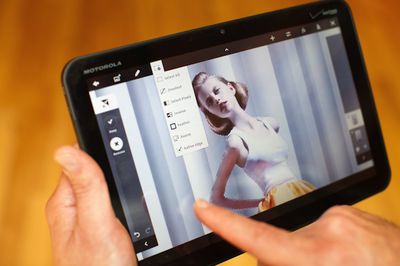 Adobe Photoshop Touch
The new tablet apps are being released for both Android tablets and the iPad, with the Android apps set to launch next month. Unfortunately for iPad users, Adobe does not yet appear to have a release date for the iOS versions of the new apps for that platform, stating only that an announcement on availability is scheduled for "early 2012".

The six apps, which will carry "introductory pricing" of $9.99 each, include:

AZREOSpecialist
How interesting that Adobe is releasing these apps for an OS (Android) that has absolutely no tablet market share, yet for the #1 tablet with over 80% market share they say "sometime in 2012". Developing for Android in preference of iOS in the current market makes no sense. There is a different motivation at work here.
Score: 9 Votes (Like | Disagree)

I don't understand? It says both Android and iPad.


"Unfortunately for iPad users, Adobe does not yet appear to have a release date for the iOS version of the new apps for that platform, stating only the an announcement on availability is scheduled for "early 2012"."

Peace
That's Adobe for ya..Purposefully leaving out the #1 Tablet only because they are having a spat with Apple..

APlotdevice
Experience tells me that Photoshop touch is probably going to be missing a number of features already found in existing raster apps for iOS. Adobe is really stingy with budget software. (GIMP, a free program, beats Elements in almost every way)
Score: 4 Votes (Like | Disagree)

That's Adobe for ya..Purposefully leaving out the #1 Tablet only because they are having a spat with Apple..

I don't understand? It says both Android and iPad.
Score: 4 Votes (Like | Disagree)
Read All Comments

Tuesday September 27, 2022 10:24 am PDT by Juli Clover
The most recent beta of iPadOS 16.1 expands the controversial Stage Manager feature to older iPads, allowing it to work with iPad Pro models that have an A12X or A12Z chip, according to information Apple provided to Engadget. The beta also removes the external display support from Stage Manager for the current time, with the feature set to return in a later iPadOS 16 update. Apple's...
Read Full Article • 262 comments