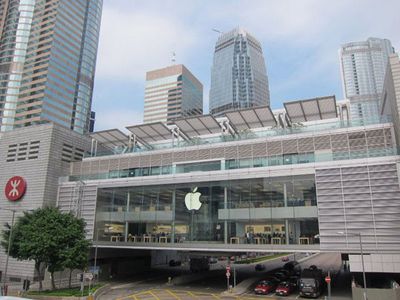 Apple opened the new Hong Kong retail store to the press, providing the first look inside the massive new two level store. NeonPunch provided this video walkthrough (and photo gallery), and reports that Apple has hired over 300 employees to work at the store. The new store is also complete with a spiral glass staircase in the center.


Meanwhile, MICGadget reports that Apple CEO Tim Cook is rumored to be making the trip to Hong Kong to attend the opening ceremony. The new Hong Kong store will be opening on Saturday, September 24th at 9am. The report also suggests that Cook may attend the grand opening of the Nanjing East store in Shanghai. Cook's travel schedule may explain the unusual Friday opening for the Nanjing East store.

Thanks to our reader for the photo

iJet? Is there such a private jet?

penguinsix
While they do have credit card enabled iPhones for the POS, due to restrictions in the Hong Kong banking / credit card system they still have to run a transaction through a dedicated credit card machine, which are conveniently stationed throughout the store. A tad annoying that it's not like the US system, but it's not really Apple's decision, more the way credit cards are processed here in Hong Kong.

Here's a pic of one of the machines I took while on the tour.

iJet? Is there such a private jet?

are you serous.. lol

There actually is such a jet. It's a Gulfstream V that was given to Steve Jobs by Apple in 1999, and Steve uses/used it a lot for his business travel.

It's FAA registration number is the rather cool "N2N".

LegendarySlayer
God I love those iPhones they have at the store's with credit card readers...so convenient ;)
Score: 2 Votes (Like | Disagree)

BiscottiGelato
Considering that Hong Kong is a city with some of the highest density of high end stores in the world (maybe second only to Tokyo?)... Consider Louis Vuitton, I'm sure there's a higher density, and even number of stores, in Hong Kong than in Paris...

And Apple is having their FIRST store there? Quite behind the curve I'd say.
Score: 1 Votes (Like | Disagree)

Having lived in Hong Kong, i know this building very well. It's truly a prime piece of retail location. Hong Kong rents are among the highest in the world though, and with so much sq feet for this shop in this country on that location !?! Good luck making a profit, even for apple it will be challenging.

This being said, Hong Kong was missing an Apple shop though ... Go Apple!

Just think how many possible customers they have though. Over 90% of Hong Kong residents would much rather buy from an actual official AppleStore than mess around bargaining with some third party. Then you have visitors, the AppleStore is a welcoming place, and much less daunting than trying your luck as a Gweilo in Sham Shui Po etc. Then you have all the mainlanders filling their boots to take over the border.

I take you point though, to lease that much square footage in Central must be costing Apple a pretty penny, but I seriously think they will take a fortune through the tills at the store. I'm surprised it's taken Apple so long to have an official presence in Hong Kong, and would think we could see more stores over the next few years (Causeway Bay, Tsim Sha Tsui etc etc).
Score: 1 Votes (Like | Disagree)
Read All Comments