Apple Revealed as Owner of iPodSolar.com

A recent change to the WHOIS registry for the domain name iPodSolar.com has confirmed that Apple is the owner of the domain, which currently redirects to Apple's iPod site. Apple appears to have registered the domain as long ago as early 2007, but the domain has been listed until recently as belonging to MarkMonitor, a brand protection firm used by Apple and other companies for such purposes. 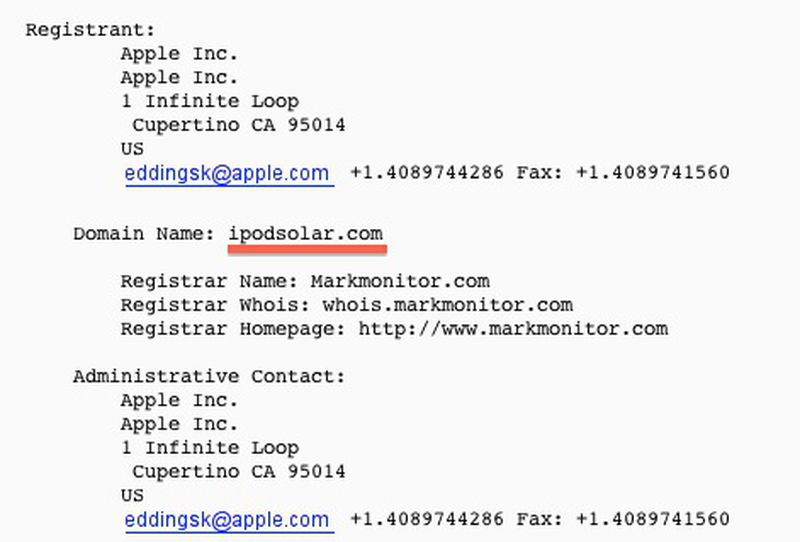 Apple's interest in solar cell technology for its products has been evident for many years based on patent applications covering the technology. A report from several months ago indicated that Apple has indeed been holding discussions about solar technology with several Taiwanese vendors, although any such projects would still be in the research stage and not yet near a public release.

Drawing from Apple's new patent showing iPod with integrated solar cells
Coincidentally, Patently Apple reports that Apple was just today awarded a patent for a power management system that would enable the company to place solar cells on the exterior of devices such as iPods and integrate that power source with an internal battery. The patent was filed for in mid-2008 and was first revealed in early 2010 as the patent application was released to the public.
17 comments

JAT
I don't get it. Are people's phones and music players often sitting in the sun? Mine's in a pocket if I'm walking. Plus, what pewra said. Doesn't seem to be a useful tech.
Score: 3 Votes (Like | Disagree)

pewra
Even with 100% efficiency, there is no where near enough power generated by solar panels on the surface of any iPod device. Unlike common belief, you can not use solar panels indoors to 'trickle charge', and having any part of the panel covered reduces it's output to nothing.

You would be far better off using the space taken by the panel and DC converter to put a slightly bigger battery in.

If you want a 'solar charger', go buy one; Apple is never going to release an ugly device for the minority that would use it. Moreover, you have them in your pocket most of the time, get real.
Score: 2 Votes (Like | Disagree)

segers909
This would make sense for something like an iPhone sized iPod shuffle. Minimal power usage, lots of area to cover with solar cells. It could be the iPod that never has to be charged.
Score: 2 Votes (Like | Disagree)


As far as this particular argument is concerned, the solar cells could be pink with purple polka dots. If the solar cells are covered, they can't do their job.
Score: 1 Votes (Like | Disagree)
Read All Comments