The U.S. Patent and Trademark Office today published several new patent applications from Apple, revealing research into several areas, including the use of gesture-based input devices and solar panel technology in the casings of iPods. 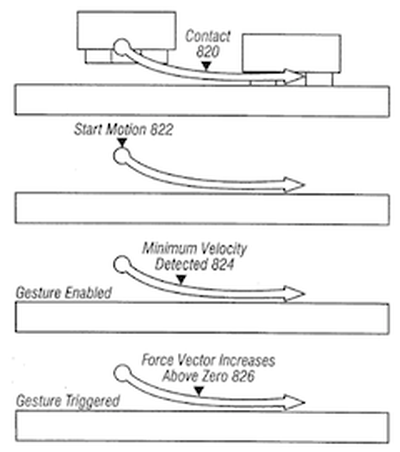 Detection of "contact" and "lift" mouse gestures
In the first application, entitled "Methods and Apparatus for Processing Combinations of Kinematical Inputs", Apple describes the use of force and velocity sensors included in an input device such as a mouse to record gestures, which can then be interpreted as input by a computer.

Some embodiments of the present invention therefore enable a user to provide a series of gestures as input to the receiving device. Such gestures may include, for example, brushing motions, scooping motions, nudges, tilt and slides, and tilt and taps. The application can then respond to each gesture (or gesture combination) in any number of ways.

Embodiments of the present invention may therefore have applicability to any electronic system or application capable of receiving input. For example, embodiments of the present invention may be useful with video games, file browsing, interactive navigation, communication systems, control systems, military systems, medical devices, and industrial applications.

Detection of "tilt" and "tap" mouse gestures
The patent application, which was filed on July 18, 2008, is credited solely to Apple engineer Omar Leung.

The second application, entitled "Power Management Circuitry and Solar Cells", describes a power management system that would allow portable media devices such as the iPod and iPhone to operate primarily on solar power. The details of the application describe methods for integrating both solar and battery power sources, using switches to reconfigure sections of solar cells on the exterior of the device such that a constant voltage is generated even if certain solar cells are obstructed by a user's hand or device orientation.

Apple has revealed an interest in solar technology for its portable devices in the past, previously filing a patent application describing the addition of solar cells behind the glass of an LCD screen. It is unknown, however, whether such technology will ever be included in shipping devices, as Apple has a history of applying for patents on technologies that never end up seeing the light of day.

Tuesday January 18, 2022 10:35 am PST by Juli Clover
Verizon and AT&T's upcoming rollout of new C-Band 5G technology could cause chaos and lead to widespread delays of passenger and cargo flights, major U.S. airlines said on Monday in a letter sent to the White House National Economic Council, the FAA, and the FCC (via Reuters). "Unless our major hubs are cleared to fly, the vast majority of the traveling and shipping public will essentially...
Read Full Article • 175 comments