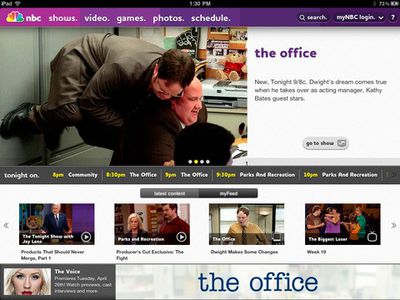 "We are thrilled to offer our fans full episodes via our NBC.com app. Now the app truly reflects the deep fan experience that we have created online at NBC.com," said [NBCUniversal Digital Entertainment President Vivi] Zigler. "And our fans are going to love the latest update to the NBC Live app which now offers them more content, better access and a unique social television experience."

In addition to full episodes, the NBC app for iPad, which launched in June 2011, gives fans access to content from their favorite shows and features such as thousands of video clips and highlights, exclusive photo galleries, recaps, games and news, making it all customizable from the myNBC dashboard.

TNT for iPad
NBC is not the only network to roll out new support for full-length episodes, as Turner Broadcasting has also released new TNT for iPad and TBS for iPad applications offering access to full episodes from those channels for users who are eligible through their cable company subscriptions. The company also updated its iPhone applications for TNT and TBS with the same functionality.
Related Roundup: iPad
Tags: NBC, TNT, TBS
Buyer's Guide: iPad (Caution)
Related Forums: iPhone, iPod touch and iPod, iPad
[ 89 comments ]

darkslayer13
This article should be retitled:

"Anyone who doesnt own an iPad shouldn't bother to read the following"
Score: 10 Votes (Like | Disagree)

Simmias
This is a step in the wrong direction. I do not want my TV shows balkanized into separate apps, each with their own interface. I do not want separate NBC, TNT, and Turner apps, anymore than I want separate Warner and Universal apps for watching movies, or separate Random House and Simon and Schuster apps for reading books. TV content (both free and paid) should be centralized in the iTunes Store, or at least a Hulu-like TV app. Obviously, this is what consumers want, but not the networks. They can insert all the ads, watermarks, or network promos they want into free content, but please no separate apps to clutter up the home screen and make it difficult to search/browse all available content.
Score: 8 Votes (Like | Disagree)

So tired of these types of posts. Of course it's USA only, they are US-based companies with broadcast rights in the US. :rolleyes:
Score: 8 Votes (Like | Disagree)

dagamer34
This kind of stuff is why AppleTV needs an App Store. As much as people like watching stuff on their iPad, they overwhelmingly prefer the watching on the largest screen in their house.
Score: 8 Votes (Like | Disagree)

SwiftLives
Are any of these AirPlay enabled?
Score: 6 Votes (Like | Disagree)


Came here to say this. Canadian (and other not US countries) content providers really need to step it up. People turn to piracy because you force them too.
Score: 6 Votes (Like | Disagree)
Read All Comments