As we approach the anticipated launch of the iPhone 5, we are seeing an increasing number of small leaks related to the production of the device in China. As the design is finalized, and production begins to ramp up, it's common to see early parts leak into the supply chain.

We were tipped that iPhone parts supplier TVC Mall has posted a few new claimed iPhone 5 parts this evening, including the Battery, Back Camera Lens, and Headphone/Earphone Audio Jack Flex Cable. The new parts are definitely different from the existing iPhone 4 parts, though the superficial changes seem unrevealing. We've shown them side-by-side in comparison, using images of iPhone 4 parts courtesy of iFixit. 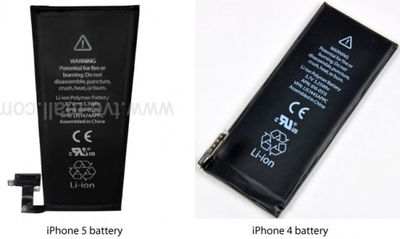 As with all these early iPhone 5 parts, the supplier website has scant details on the specifications. In fact, we doubt that they even know the specifications at this stage. Some dimensions do seem to be given for the parts, but when compared the dimensions for known parts (such as the iPhone 4 battery) on the same site, there seemed to be a wide discrepancy against other published specs we'd found on the internet. So, we can't put much faith in the listed dimensions.

The final new part listed on the site is the Audio Jack Flex cable. There isn't much we can say about it, though it does look very different from the existing GSM and CDMA parts. We asked iFixit's Kyle Wiens and just based on the images shown, Wiens said that the part numbers were reasonable, and the markings consistent with the currently shipping cable.

The iPhone 5 is widely expected to launch in September or October.

Update: iFixit has gotten its hands on what appears to be the exact same camera module being advertised by TVC Mall as being for the iPhone 5. According to iFixit's Kyle Wiens, the sensor is essentially identical to the iPhone 4's camera, checking in at the same 5-megapixel resolution with other specs also appearing to be identical. Consequently, it is unclear if this is indeed an iPhone 5 camera module, an existing iPhone 4 module, or perhaps an "iPhone 4S" camera module should Apple be looking to introduce a new low-end model based on the existing iPhone 4 design.

talkingfuture
Soon we'll be able to figure out what iPhone 5 looks like from piecing together all the leaked parts.
Score: 18 Votes (Like | Disagree)

Is it just me or does the iPhone5's battery have a totally different shape :confused:


it's tilted towards you.

This will be my first iPhone!
Score: 6 Votes (Like | Disagree)

it's tilted towards you.


Oh okay, that explains it.

I was thinking, why isn't anyone mentioning the crazy shape-change?
Score: 5 Votes (Like | Disagree)

Fugue
Was hoping for an improved battery. Apple should stop investing in screens and start investing in batteries.
Score: 3 Votes (Like | Disagree)
Read All Comments

Friday May 27, 2022 2:15 pm PDT by Juli Clover
There's just over a week to go until the 2022 Worldwide Developers Conference, which is one of the biggest Apple events of the year. We've heard surprisingly little about iOS 16 this year, so we're in for some major surprises when June 6 rolls around. As we wait for the keynote event, we thought we'd share some iOS 16 wishlist items from MacRumors readers, because who knows? We just might...
Read Full Article • 250 comments