A class-action lawsuit has been filed against Apple and 5 of the 6 major book publishers, alleging they "colluded to increase prices for popular e-book titles to boost profits and force e-book rival Amazon to abandon its pro-consumer discount pricing." 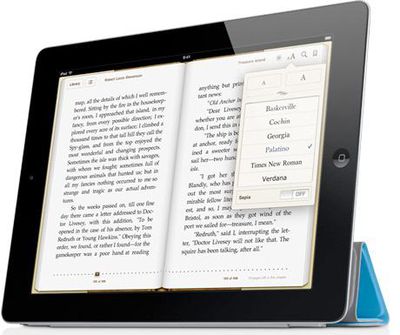 The lawsuit, filed this afternoon in the Northern District of California claims Apple and Hachette, HarperCollins, MacMillan, Penguin, and Simon & Shuster illegally worked together to enable an "agency model" as the standard for e-book sales, rather than the "wholesale model" that is used in the physical publishing industry. The complaint argues that the strategy was unfair and anticompetitive because e-book prices rose after the agreements were in place.

In November 2007, Amazon revolutionized the book publishing industry by releasing the Kindle, a handheld digital reader for electronic books or “eBooks.” Using proprietary “electronic ink” technology, the Kindle replicated the appearance of ink on paper and introduced numerous efficiency-enhancing characteristics, including portability and other advantages of a digital format.

A major economic advantage to eBook technology is its potential to massively reduce distribution costs historically associated with brick-and-mortar publishing. But publishers quickly realized that if market forces were allowed to prevail too quickly, these efficiency enhancing characteristics would rapidly lead to lower consumer prices, improved consumer welfare, and threaten the current business model and available surplus (profit margins). So, faced with disruptive eBook technology that threatened their inefficient and antiquated business model, several major book publishers, working with Apple Inc. (“Apple”), decided free market competition should not be allowed to work – together they coordinated their activities to fight back in an effort to restrain trade and retard innovation. The largest book publishers and Apple were successful.

When Apple introduced the iBookstore, it used a so-called "agency model" where publishers set the price for their content and Apple takes a 30% cut. It's the same pricing model that Apple uses on the iTunes Store for music, and on the App Store. It's a change from the "wholesale model" that Amazon had been using for e-books and it and brick-and-mortar stores like Barnes & Noble continue to use for physical book sales.

Publishers were concerned that Amazon's aggressive $9.99/book pricing strategy -- where the bookseller sold books for a loss, presumably to drive adoption of its new Kindle platform -- would quickly erode the profits and reduce the perceived value of their books. Random House was concerned the agency model would lead to a price war between the publishing houses.

This lawsuit alleges that as a "direct result of this anticompetitive conduct as intended by the conspiracy, the price of eBooks has soared" and "bring claims under federal and state antitrust laws to enjoin the illegal conduct and to obtain damages."

We've uploaded the filing to Scribd.

Capt Underpants
I do think it's a bit ridiculous when a kindle eBook is more expensive than the same hard copy book on Amazon.
Score: 50 Votes (Like | Disagree)

macUser2007
This was truly one of the most evil things Apple did, not too long after Steve Jobs publicly proclaimed that "Nobody reads books anymore."

Until he realized that he can ride to higher profits on the burgeoning e-book sales, that is.

I hope the suit wins. It will be better for all consumers.
Score: 31 Votes (Like | Disagree)

Yeah where are all the "green people" now? bitching about the price!


And they should be. There is no where NEAR the same overhead needed for an ebook as is needed to produce and distribute a physical book. Reminds me of Costco vs. Sams -- Costco does business on the notion that there's no reason for 'windfall' profits: if the price to produce goes down, the price of the product goes down too. Period. Sams just eats the created margin. The same is true here. Rather than attempting to push market growth and encourage adaptation, we're being hamstrung by higher prices for pure greed. Make no mistake, the production cost on e-books already were already lower and are only going down. We're being price gouged.

Who cares! if you don't want to pay for an e-book pay full price at the bookstore!

WannaGoMac
Good! I hope they win.

It's ridiculous that ebooks cost the same or MORE than physical books. Fact is this is collusion on pricing, and publishers are trying to protect the layers of middle men no longer needed. Many many authors who turned to ebooks self published report they make the same money selling ebooks at $2/book as they did using publishers of physical books.

ebooks are NOT worth $10 or higher. More like half that (at MOST). Until then, everyone should pirate the ebooks.
Score: 20 Votes (Like | Disagree)

StyxMaker
Let me see if I get this right, Amazon dictating the price of ebooks was 'free market' and Apple letting the publishers set the price is 'anti-competitive'?
Score: 9 Votes (Like | Disagree)
Read All Comments